Beguiling the Earl by Suzanna Medeiros 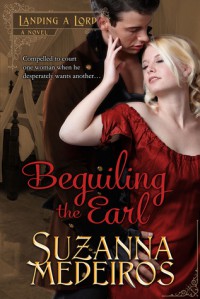 Catherine has had a secret crush for the Earl of Kerrick, her new brother-in-law's friend, ever since she meets him.  While he is eleven years her senior, Kerrick is starting to see Catherine in a new light and finding he is searching out her company more and more.  Just when he decides to make a move, the Earl of Brantford calls in an owed favor for the War Office.  Kerrick suddenly finds himself paying court to Rose, the daughter of Lord Worthington who is under investigation for alleged traitorous deeds towards the crown.  While Catherine learns of Kerrick's secret activities and the reasons behind them fairly quickly, the situation is abounding with feelings of betrayal, trust issues, and unanswered questions.

Beguiling the Earl is second in a series which I think lead to it starting off a bit rough as the author worked to get new readers up to speed on past events and get all the characters introduced.  I read the previous book and the novella but feel this one could be read as a standalone, there is only one or two times new readers might feel lost.  After the first couple chapters however, the author seems to settle in and gain her stride as the story and main characters take off.   As mentioned, Kerrick is working for the War Office as a pseudo spy investigating Lord Worthington but we never get to see him do anything of value besides a mention of searching the Lord's office for incriminating evidence.  Catherine almost does as much when she befriends Rose and gleans information about Worthington's financial straits.  The spy thread is very thin and is an obvious mechanism to keep our leads apart and create drama. Fortunately, Catherine and Kerrick have enough charm to keep the reader interested.

Catherine is calm, no nonsense, and drama free character that is refreshing to read about.  The story could have easily devolved into a Big Misunderstanding with Kerrick fake courting Rose but Catherine took her knowledge of Kerrick and asked the pertinent questions from him and Kerrick, bless his heart, trusted her to handle the truth.  This created a story where the couple worked together to not only solve a problem but to keep trust in each other; a treat to read about.  Other than his honesty though, Kerrick doesn't really stick out, he is almost bland in his average regency hero status.  As the two meet and began developing feelings for each other in the previous book, there is sort of a missed pleasure of seeing and feeling them fall in love as the bulk of this story is them working to ultimately be able to announce their engagement.

Overall this is a good addition to the series and perfect if you are looking for something a little more light and don't want to be too taxed while reading.  The next couple in the series is also introduced and highlighted a good amount with enough appeal that I'm for sure adding it to my tbr pile.  I have to know if Rose's father is truly guilty and if the Unaffected Earl can continue to hide his feelings.