Oh, the sexual tension my dearies 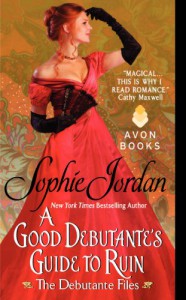 Had to jot a few thoughts down about it but there are some other really good reviews out there that should be read for a more comprehensive take.

I don't have a stepbrother or a brother, so I have no feel for that kind of relationship but I was never bothered by the fact that Declan and Rosalie were stepsiblings.  When the story starts they have been separated for 10 years and then we get a few reminiscent memories talked about throughout. I never got the ick factor; I was so into the overall story that the terms stepbrother and stepsister were barely a blip on my radar.

I have never read a book by Sophie Jordan before but am definitely going to rectify this, she has got my number.  This one started off dark and alluring and the way scenes are described, the way Declan runs his finger around the rim of the glass, put me right in the room with them.  The heat and tension between Rosalie and Declan made me, trust me I had no choice in the matter, read this book in one sitting.  I'm more of a tension, foreplay, push/pull person so I ate this story up with a freaking spoon.  The bedroom scenes (and library scene ;) were on point too as they were descriptive and hot with the desperation, longing, wanting, and chemistry.

This story had me invested but there were a couple times when I was able to step back, think, and notice the few instances where there were some repetitive descriptive lines, Rosalie was a bit overly naïve innocent regency miss, and at about 60% through I stopped to think about how much time they really hadn't spent together.  Declan and Rosalie work extremely well together in high tension, sexual situations but could they ever just, I don't know talk about the weather?  Really though, who wants to read about that? There is also an abuse situation discussed that adds a little heft to the story but it’s never flushed out fully, so just a little.  What I’m saying is this story is to be read for the sexual tension and not to change your life.

If you were at all hesitant about reading this because of the stepsibling relationship, I would say that it is enough of a nonentity that you should be fine.  I was a big fan of this one and am putting most of the reason down to Ms. Jordan's writing style.  I am also frothing at the mouth to read Max and Aurelia's story.  Aurelia is Declan's sassy cousin and Camden is Declan’s stoic friend, they bicker a lot and I can already feel the sexual tension between the two. I have a feeling their book is going to be a read in one sitting too.