Unlaced by the Outlaw by Michelle Willingham 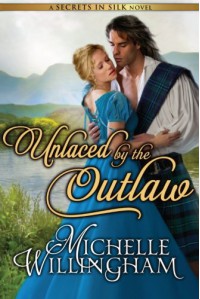 Margaret and Cain have known each other for years, with Cain silently and at times not so silently loving Margaret from the sidelines. When Margaret's sister is taken by the Lord of Lisford, who just so happens to be Margaret's ex-fiancée and the man who left her at the altar, she immediately goes to the one man she trusts to help her. Cain knows it is not a good idea to travel alone with Margaret but finds it impossible to refuse her. The two set off on a journey that ends up testing their mental and emotional resolve while bringing to head the question of can or should they be more than friends.

I once again found myself wishing editing had played a bigger part in the finishing touches of a novel. The first seventy percent was a road romance with Margaret and Cain encountering various obstacles and Margaret rejecting any thought to marriage with Cain but by no means completely rebuffing his physical overtures. While it is completely understandable, due to the importance of the class hierarchy during this time for Margaret to have misgivings about marrying someone completely outside her class, the amount of time her reluctance lasts also makes her ultimately an unsympathetic character. Margaret became annoying and Cain lost my respect every time she leaned on him for support but bemoaned his low status and he kept pulling her in for kisses and touches which she accepted only to push him away again and again; it all became very numerous and repetitive.

The lather, rinse, and repeat I mentioned created a pace that was quite slow moving and tempered my motivation to keep going. The author's writing had structural quality though, and Cain was a hero that would cause many a heart to flutter, I just wish he hadn't taken so many metaphorical slaps to the face by the heroine. The last thirty percent or so moved along better as Cain's brother was involved in murder mystery but it also felt like it came out of nowhere. The whole story was about Margaret's fear of being controlled by a husband and marrying so below her station and then suddenly we're switching gears and trying to save Cain's brother from the gallows. It felt out of place and didn't mesh well with the previous feel of the story.

This was book four in the Secrets in Silk series and for the most part I believe it can be read as a standalone. You're thrust into the story a little bit in the beginning and its obvious secondary characters mentioned have had importance in Margaret and Cain's backstories but I never felt completely lost; the murder mystery with its victim is probably where not reading the previous books would hurt you the most. Margaret and Cain have some pleasing moments together but unfortunately, fell short of the mark.