The Icarus Plot by Jenny Schwartz 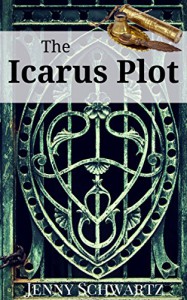 "It’s the traces of his humanity that add horror to the madness.”

Children are disappearing from the streets of London and the whispers carry the tale that a "Metal Man" is to blame. Ivana runs a toy shop that has helped her gain the trust of the street children, so she is the first that they turn to for help.   When Andrew, the newly minted Earl of Somer, goes to the police station to ask for help in finding his late cousin's bastard son the over worked coppers direct him towards Ivana claiming she would be the best bet in finding the child's whereabouts. From there our leads team up in an ominously mysterious steampunk novella to save the children from the Metal Man.

As mentioned this is a novella and certain intriguing story threads simply didn't have room to fully develop, I became hooked and wanted more. The story threads of Ivana using her toy store as a front to develop instruments of protection for women, who "The Chemist" is that was helping the Metal Man in his schemes, and Andrew and Ivana's relationship were hinted at and discussed and were immensely engrossing, this story definitely could have been made into a full length novel. Even with the short amount of pages the author managed to create a villain that was ghoulish and menacing but also showed a hint of humaneness.

Ivana is the stronger of the characters as more of her past and personality are shown but Andrew works as a terrific accompaniment. Their partnership in finding the children flows gently and believably into a romantic relationship. The reader can feel something tangible between them and they are a pleasure to read about, even though their story ends rather abruptly.

If looking for a quick eerily fantastic steampunk novella with a hint of romance, then The Icarus Plot would be a great choice to spend an hour or two.