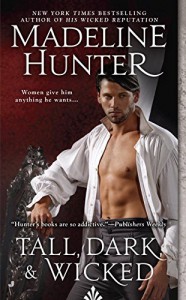 Ives stood there in his shirtsleeves. No coats, no cravat. No pretense.

He did not say a word. He did not have to. He announced his intentions with his mere presence, and through the way he looked at her.

I think amazing book hangover colored my experience with this one. It was well written but the relationship between the two leads in the beginning felt a bit stiff to me. Later on, when they entered the bedroom, things turned sultry but I still never felt myself warming up to them.

Like everyone else, I'm disappointed there were no courtroom scenes with our hero being a barrister; such a lost interesting opportunity.

I really liked the brothers' relationships and how they interacted with one another. This was my favorite part of the story and where I felt realness of relationship and emotion.

*Anyone else think the guy on the cover looks like a pouty little boy who got his toy taken away?