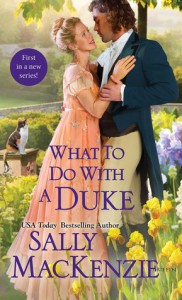 "Your name and title will continue after you're gone," she said, looking up at him. "But can you understand at all how fleeting a woman's existence is? We give up our lives and possessions---even our name---to our husbands. Our bodies become little more than vessels for children, to continue our husbands' lines." Her voice hardened. "I want something else. Something more. Something that's mine, with my name on it."

First off, that cover is delightful, the light colors and the kitty cat (who plays a bit of a role in the story) make for a very eye catching and pleasing image. Moving on to the actual story, I was a bit disappointed in the insta-lust and later love. From the moment our hero and heroine meet, their bodies are just drawn to one another; the personality of their attraction and relationship was missing. I can't say I felt any chemistry between the two and with both characters not realizing they actually love one another, which felt insta also because they never really communicate and don't spend a lot of time together communicating and building a relationship, until the very, very end of the story. It feels like I'm running into that problem a lot lately in stories.

The bit about the curse felt very uneven, on one hand we have the hero believing it but on the other we have all the other characters making fun of how anyone could be so superstitious and believe such a dumb thing. I also had some slightly uncomfortable moments were the heroine and other woman characters say some off putting things about women. When the heroine is discussing the curse, she says something along the lines about if the Duke did rape the merchants daughter, it doesn't really matter because it happened over 200 yrs ago. There are other lines that aren't blatantly sexist but I was uncomfortable with their line of thinking.

The hero and heroine didn't interact enough for me and their chemistry just wasn't there. The ending was a bit abrupt, especially concerning the curse storyline, and I think it might continue on in the next in the series (but I wouldn't call it a cliffhanger). It's a lighter feeling story, a bit anachronistic, has a slight touch of paranormal, and if you're looking to escape the ballrooms, it never ventures there. I've never read a book by this author before, it seems she might tend more toward the silly and light side, so maybe the writing style is just not for me.