The Highlander by Kerrigan Byrne 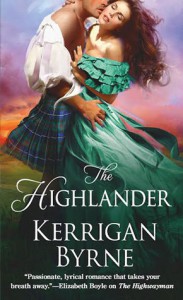 Escaping from an asylum that her abusive husband put her away in, Philomena has traded the title of Viscountess for governess. Seeking escape with The Demon Highlander however, might prove the most fatal decision yet.
Liam's father taught him and his brothers physical and mental torture from an early age and a lifetime of war has engrained the darkness into his soul. When his new governess Mena arrives, her bravery in speaking to him and the glimpse of a safe haven in her eyes has him wanting things he doesn't deserve.
After years of living in torment, can Mena and Liam help each other shed their chains?

Third in the Victorian Rebels series, we have The Demon Highlander (Dorian's half brother, The Highwayman) and Viscountess Benchley's (first introduced in The Hunter) story. It's not absolutely imperative that you read the previous two books in the series first, but it would certainly enhance the reading of this one as it would add to the characters' background. Also, those first two books are really good, so worth your time. Changing it up a bit, the author focuses more on the heroine this time, and while I'm usually a more hero-centric reader, I loved it.

It had started gradually, her hell within the St. Vincent household. And before long, when Gordon had thought her broken, when his jibes and torments no longer seemed to affect her, her husband became violent. Acts that would land a man in prison should he enact them out on the streets were all perfectly legal if he perpetrated them on his wife.

Philomena, who likes to go by Mena, has a heartbreaking story, made more devastating by the fact that you know it's the true story of many a powerless woman. She married young to a handsome Viscount who wanted her money and abused his power over her. After Mena testifies against his sister (The Hunter), he puts her away into an asylum where she is tortured with their "tests" and "treatments". As in the author's fashion, the beginning of the story immediately places the reader into a dark scene; Mena is trying to mentally and physically fight her "doctors". I found it to be more emotionally brutal than visually (there is a threat of rape) and all the more shattering because of this.

Through this scene and as she travels to the Highlands, the author gives us a poignant look into Mena that encompasses her inner strength, vulnerability, pain, fear, and will. This follows throughout the book as Mena interacts with Liam. We have a wrenching scene where Mena is scared that the bath they prepared for her will be full of ice water (asylum treatments) and then her fearful bravery as she speaks her mind to Liam but flinches from him. Does she seem to gain the ability to stand up to Liam a little quickly? Yes, this is only a 300pgs book after all, but I was still with her every heart squeezing step of the way.

She made him hard, so fucking hard that he couldn't think. But she made him soft, too. In those spaces he'd built walls and fortresses, around those places where memories, sins, and pain lay scattered about like shards of glass in a dark room, waiting for an unsuspecting victim to venture forth. And therein lay the danger.

Our hero has his own devastating story; his father was a sadist that actively worked to make his children in his image. He lives with knowledge of how he survived those years and then what he did as a Lt. Colonel. The things he did in the name of the crown, I thought could have been fleshed out more, the dichotomy of for King and Country with the emotional toll of trying to destroy a culture and people. This author has a tendency to add too much; it detracts and keeps her from being able to go deeper with one of her ideas. The relationship and connotations with his valet, an Indian boy whose village and family he helped wipe out, definitely could have been fleshed out more. This author has amazing story plots and threads but I'd like to see more with less.

Liam was a tiny bit overshadowed by Mena, she was so well drawn I don't think it could be helped, but towards the last half of the book, he really shined with some make you melt lines. At first though, he came off a little too immature with his possessiveness and anger. His huffiness and fury was too extravagant; I worry for the amount of blood vessels the guy must pop. Once we got past the need to puff him up to show how much Mena calmed and settled him, I liked him a lot more.

"It's impossible to deny it, lass." He smiled down at her, and Mena suddenly knew that one could feel the warm rays of the sun even in the dark of night. "Try as ye will to resist me, I'm after ye, Mena, and I willna claim ye until ye yield. But I'll not stop until every last one of yer defenses are in ashes at my feet."

I told you Liam says some pretty make you melt lines, if that quote doesn't get to you, nothing will. I loved how when Liam saw how Mena was scared of him, it diffused his anger and how he became careful but still pushed her. This couple had chemistry and emotion in spades but for the first half, there was a lot of blood rushing causing boners. Can our heroes not always get a hard-on when they glimpse the heroine? I know people generally get physically attracted first but I would love to see more emotion than lust. A witty or sassy comment that turns a head and gives a spark to the eye, would, for me, go much further than britches getting snug. The first half was a bit weak on this, while the second half was much better.

While there was one too many painful pasts, one too many villains, and a secret held much too long, this author is still ahead of the game. The pacing (a little rushed of an ending), tone, and flow was the best yet out of the series, while the emotional depth held true. The secondary characters only want me to know their stories and I've rarely read a more deft hand at writing scenes that create such visually stunning pictures in my mind (Liam first riding out of the mists and the Samhain celebration scenes were 5 stars on their own). Liam and Mena were two wounded souls that found solace in each other, it doesn't get much more romantic than that.