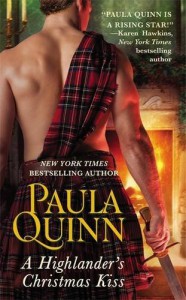 After having his last two true loves die in his arms, Cailean has decided that the only way to go through life is to be completely cold-hearted and not grow attached to anyone. He joins a group of mercenaries called the Black Riders and tries to shut himself off from the world. His cousin Patrick refuses to leave him though and does his best to keep Cailean from icing over his heart. When Patrick gets shot with an arrow, Cailean demands vengeance, unfortunately, his anger leads him on the wrong path.
Temperance has long tried to avoid Duncan Murdoch and his father's group of Black Riders. When they come to her village and murder her father in front of her, she vows vengeance against all the Riders. Cailean and Temperance both have their fair share of hurt, anger, and pain but will they be able to see beyond all that to the love and happiness awaiting them beneath it all?

"Ye are my candle in the dark."

Fifth in the MacGregor's Highland Heir series, we get Cailean Grant's story. We last saw him losing the woman he loved as she died in his arms and are reminded that his beloved dog also died in his arms. Both instances are heartbreaking but if you haven't read the past books, you wouldn't know how much Cailean loved his dog, there is little mention of the woman, and what we do get is how Cailean only knew her for a couple weeks and no one else knew he was in love. It makes the two instances seem distant and doesn't wrench the readers hearts, therefore making Cailean’s insistence to be cold-hearted and shut off from the world seem a bit over dramatic. It also gave a contradictory feel when Cailean mentions how he misses writing poetry and is given to flowery talk to and about Temperance but supposed to be totally against falling in love; it felt as if the author was trying to mold Cailean into someone he wasn't.

Temperance was the independent, beautiful but doesn't realize it, and strong willed heroine, not a lot to distinguish her from other heroines in the genre. She was likeable until towards the end where we have to have the prerequisite extra angst and Temperance gets extra strong willed (stupid) in her quest for vengeance. Cailean and Temperance didn't have the burning chemistry I search for in books, they start off very doe-eyed about each other's looks and it feels like it is just a given that they will then end up together.

The villain was satisfactorily villainous, Temperance's Gram was sweet and quaint, and Cailean's cousin Patrick was loyal and side-eye sexy enough to anticipate his book. The biggest problem I had with this is that if you have read the other books in the series, no new ground is covered here and in fact, this book felt like a lot of filler; nothing really happens for most of it. Cailean slowly recovers from an injury as Temperance is attracted to him, there is the side angst that Cailean is a Black Rider and Temperance hates them, and then the ending danger as Duncan Murdoch comes back into play; I felt myself getting bored through a lot of the middle.

With a title of A Highlander's Christmas Kiss, you'd expect some holiday ambience and the story definitely delivers on that front. The talk of the celebrations the villagers observe along with the scenery and weather adding to the scenes was my favorite part of the story. If you're a diehard reader of the MacGregor series and have to know how each descendant of The Devil MacGregor and his friend Graham Grant end up, then this could be a good Christmas time story but others probably won't find a lot here for them.