History and romance, my favorite combo 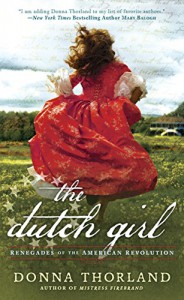 "You mean you will let us have novels?" asked the taller one, who must be Jannetje.
"As long as you do your other reading and advance in all of your subjects, I see no reason that you should not read novels."
"Reverend Blauvelt says they give women ideas."
"Well, someone has to," said Anna.

What a story. This is more historical fiction with romance than vice versa but the intermingling of fact, real historical figures/events, and romance was amazing (I do think this was heavier on romance than the previous in series). I can see a few getting bogged down in the middle with our heroine's journey turning more toward the issues of the time, British and Americans fighting for land, but my history loving heart was all in.

The story reads a bit like a crescendo, with the last 30% providing us with answers and action that the first 70% hinted at and built towards (a bit rushed of an ending). This is part of a series but you could still start here and be fine. The connecting thread is an American woman spy nicknamed The Widow who helps Anna when she is younger and is the impetus for the journey she makes. There is also a character named Kate Grey who was featured before and makes a smallish but important appearance.

The romance between Anna and Gerrit is not the focus, like I said, but when they show up together on the pages, they spark. When we first see them together their conversation and back and forth had my toes curling, not so much because of sexual reasons but from two people attracted to each other whose intelligence, wit, and teasing caused heat. They knew each other as children, so we get them falling in love through some reminiscing and I did miss more of their romance aspect in their present. I thought the one night we got of them together could have been lengthened and emboldened more but I'm greedy like that.

This is more Anna's story than Anna and Gerrit's or the birth of America but it worked well in this capacity. The details are immaculate in this without feeling unnecessary or weighed down in minutiae; the author provides an amazing feel for the time period. The secondary characters have depth and breadth that kept them from being strictly villains or heroes.

I felt this was a little different from the others in the series in that working for the cause on the American patriots’ side wasn't the focus. You'll learn about Dutch culture and since Anna doesn't so much as have a horse in the race as she is just trying to survive, you'll get how average citizens were affected by the war. There was some great feminist thinking from Anna, which even two hundred years later still begs to be discussed, that had me wanting to quote a lot from this book.

I think this story ended in 1778 and I fervently hope the author keeps writing up to 1783 and then 1812 and then, well I hope she keeps writing historical romances until the end of time. If you like this time period and want a little romance in your historical fiction, this series is a must read.