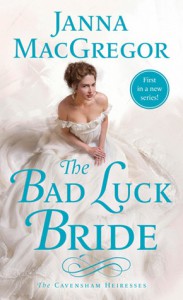 Claire is on her fourth fiancé when her "curse" strikes again but Lord Alexander Pembrooke miraculously shows up and wants to be her fifth.
Years of planning have finally put Alex in position to destroy his old friend Lord Paul, gaining the beautiful Claire is simply a bonus.
Old hurts and lies by omission will work to keep Alex and Claire apart if they can't figure out how to open their hearts to one another.

"Our marriage is based upon hate and revenge."

First in the Cavensham Heiresses series, The Bad Luck Bride is Janna MacGregor's debut book. The prologue was intense, dark, and intriguing as we get introduced to our hero Alexander and his two friends, Lord Somerton and Lord Paul. There's betrayal, pain, anger, and hurt, all set in a swirling snow storm; I was instantly hooked. As the story went on though, the author had a tendency to overwrite (a bit too descriptive at times for my tastes), the cast of characters became a bit overwhelming, the story started to drag with repetitiveness, and the focus on the lead's chemistry faded away.

Alex misinterpreted a suicide note left by his sister and blamed his friend Lord Paul for her death. This is the catalyst for the story as he works to destroy Paul and leads Alex to marrying Claire. If we would have just had this one misunderstanding, I would have went with it but Alex is a rush to judgment guy and the repeating of him getting angry and then saying oops (not the best apology man) was a bit frustrating.

I liked Claire in the beginning as she seemed unfairly saddled with the "curse" talk but we lose her as the story goes on. The curse was brought up so much, I almost thought I was reading a medieval and it was a big deal because people wanted to burn the witch at the stake. I wish it would have been handled more as a bullying tactic the ton was using instead of the awkward heavier weight it was given, especially since it isn't fully explained until the very end.

When our leads first meet, I loved the chemistry they had, their discourse had some great by-play but as the story went on, due to the overload of the curse talk, overly handful of secondary characters, and forced angst, Alex and Claire seemed to be kept apart more than they were together. Their fights and flushing out of feelings was less interactions and more in their own heads, I prefer the characters to interact more.

I wish the editor had been heavier handed as trimming up side tangents that become repetitive or simply didn't add much to the story, could have made this stronger as more scenes and the focus would have been more on what worked, the chemistry between the leads. There's also some series baiting characters, I'll be interested to see if the author plans on trying to redeem Lord Paul as he seems to have gotten a raw deal but also had a tendency to tell some lies that make him pretty hard to like.

As a debut though, I can see the hints of promise this author has and will be interested in trying her again.