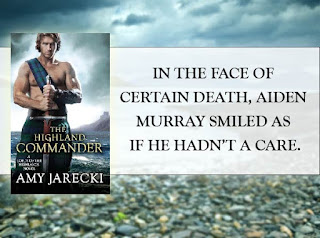 As in the Highland custom, Aiden wore the plaid belted at his waist, the length pulled from the lower right opening of his doublet, around his back and pinned at his left shoulder with a silver brooch bearing the Atholl arms. The valet had put forth a good effort ensuring there was neither wrinkle nor hair out of place.

He regarded himself in the looking glass above the mantle in the drawing room, sliding one foot forward as he would do for a portrait. Not liking the image, he puffed out his chest and moved a hand to his lapel.

God’s bones, take me to sea where I can cast aside these frills.

Tuning his back to the looking glass, Aiden resorted to pacing and pulling out his pocket watch. The coach would arrive in five minutes, and Maddie hadn’t yet made an appearance.

At least a light glowed from beneath her door indicating she was within. It cast a hazy glow in the otherwise dark passageway. After pacing around the chamber half-dozen times, he again eyed his timepiece. Another minute had passed. Perhaps he should knock on the door—perhaps Maddie’s mantle clock had stopped and she was unaware of the time. Just as he started off, her door opened. A burst of light flooded the passageway, and with the tap of dainty footsteps, an angel emerged.

Aiden knew she’d purchased a new gown, but he hadn’t expected this. His mouth went dry and he suddenly needed to take in two stuttered breaths to steady the thumping of his heart.

She smiled, and his goddamned knees wobbled. He should have taken a healthy tot whilst he was pacing in the drawing room.

Her golden gown rustled as she walked forward, with a matching fan in her hand. She moved the fan to her waist…just below her breasts. Creamy skin Aiden knew to be softer than spun silk swelled above a dangerously plunging neckline. His mouth went completely dry. If Maddie’s serving maid had been anywhere but behind her lady, Aiden would have taken the lassie into his arms, pushed through his bedchamber door and damned the recital.

“I hope I haven’t made us late.” Maddie batted her eyelashes as if she had no idea of the effect she had on his aching cods. “Miss Agnes spent ever so long curling my hair.”

Agnes cleared her throat, coming up behind with a cloak over her arm. “You’d best say so, m’lord. It took the greater part of the afternoon to make those ringlets.”

Nay, there’d be no slipping into the bedchamber for a hasty sampling of those pearl-tipped bosoms.

Aiden glanced to his pocket watch—they still had a few minutes—and now that he knew Maddie was ready, there’d be no harm in making the coach wait for a minute or two. “Fine job, Miss Agnes,” he said with more sobriety than he felt. “I think you deserve a healthy tot of fine spirit for taking such fine care of her ladyship.”

“Have we time?” asked Maddie.

Aiden led them into the drawing room and gestured to the settee. “A stolen moment will not set us behind overmuch.”

Agnes gave a firm shake of her head. “You needn’t make a fuss for the likes of me.”

“It is no fuss. You take good care of your lady, and for that I want to thank you.” Aiden poured three tots of sherry and offered each of the ladies a glass. “Shall we drink to Miss Agnes?”

Blinking, the woman drew a hand over her mouth, dipping her head and smiling broadly. “Heavens.”

“Aye, we should.” Maddie patted her chambermaid’s knee and raised her glass. “To the woman who has seen me through one and twenty years of happiness. I have no idea what would have become of me if you hadn’t been by my side. Sometimes I’ve felt as if you’re the only person in all of Christendom who cares.”

Aiden’s gut twisted. He cared a great deal, but it was inconceivable that Maddie had been made to feel like an outcast from such a young age. He drank thoughtfully, watching the two women as they sipped. Even their mannerisms had become similar. “Miss Agnes, how long have you been serving Lady Magdalen?”

The woman’s eyes glistened with pride. “Since the day she was born. The moment I held her in my arms I knew my purpose.”

Aiden glanced to Maddie and knitted his brows. “Did your mother pass in childbirth?”

Shaking her head, the lass bit her bottom lip. “Nay. My mother knew I would have a better life if she gave me to my father. Only…” Maddie looked away, and took another sip.

“The one caveat was that she could never set eyes on me again.”

Grumbling under her breath, Agnes guzzled the remainder of her sherry. “We shan’t discuss the countess any longer. It sets both of our hackles to standing on end.”

“Agreed.” Aiden set his glass on the mantel and offered Maddie his hand. “Shall we be off, m’lady? We do not want to miss the opening. I hear it will be most spectacular.”

Maddie tapped the chambermaid’s shoulder before they strolled toward the door. “I want you to take some time for yourself this night. Do something that will make you happy. You have nothing to worry about, my pet. I’ll be in Lord Aiden’s capable hands.”

Series: Lords of the Highlands, #2

She cannot resist the man behind the mask...

As the illegitimate daughter of a Scottish earl, Lady Magdalen Keith is not one to partake in lavish balls or other frivolities. Yet at her father's urging, she agrees to dance with the battle-weary officers at this year's holiday masquerade. It's practically her civic duty! But when one such officer—whose dashing good looks cannot be disguised by a mere mask—sweeps her off her feet and into his arms, the innocent lass can't help herself. Her lips are his for the taking.

But will he betray his country for a kiss?

Navy lieutenant Aiden Murray has spent too many months at sea to be immune to the charms of this lovely beauty. Even after he returns to his ship, she lives in his dreams. But when he discovers Maddie's true identity—and learns that her father is accused of treason—will the brawny Scot risk his life to follow his heart? 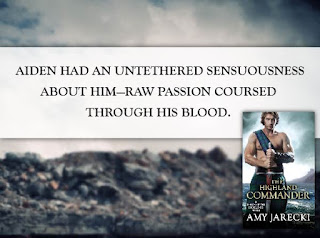 THE LORDS OF THE HIGHLANDS SERIES

Amy Jarecki is a descendant of an ancient Lowland clan and adores Scotland. Though she now resides in southwest Utah, she received her MBA from Heriot-Watt University in Edinburgh. Winning multiple writing awards, she found her niche in the genre of Scottish historical romance. Amy writes steamy edge-of-your-seat action adventures with rugged men and fascinating women who weave their paths through the brutal eras of centuries past.