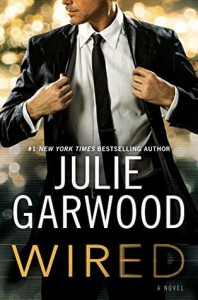 Allison is close to finally graduating and after carrying the weight of taking care of her aunt, uncle, and cousin, she is ready to move cross country and start her life anew. Her life seems on track until the FBI comes knocking on her door wanting to know just how good of a hacker she really is.
Special Agent Liam has been so dedicated to his job, he wouldn't even know how to have a normal relationship but when he sets eyes on Allison, he wants some changes. Her brains and beauty pack a punch while her sweetness has his protective side flaring to life.
Cousins, jealous colleagues, and traitors try to derail these two but Allison and Liam make quite the team.

The thirteenth installment in the Buchanan-Renard series, Wired, immerses us back into the world of FBI agents and life and death action. There were a couple appearances by past couples but newcomers to the series could start here and be ok.

The beginning starts the reader right off into the action but with a timeline that fast forwarded awkwardly, it all felt a bit jumbled. We get some information dumps to thrust us into the story and with some repeats, the editing felt a bit off. As the story went on, it started to smooth out as our leads and characters took over.

Being with him even topped writing code, and how freaky was that?

Allison is a likeable heroine but with every reminder about how gorgeous she is, models high fashion on the side, and how amazingly brilliant she is at hacking along with her overly sweet "I must do everything for everybody" attitude, she became a bit eye-rolling. Her awkwardness is cute and empathetic to a point, about the millionth time I heard about her amazing legs and how she doesn’t need make-up point. Her inability for most of the story to stand-up to her over-the-top villainous aunt and uncle was also a bit much; it started to feel like unnecessary conflict that was dragged out.

Letting out a low whistle, he shook his head.
"She's gonna be trouble."

Liam for all his protective man in charge attitude still came off somewhat wooden. I never felt like his personality was too delved into, he was always on the go without the reader having time to really get to know him, let alone Allison. After I finished the book I can't even say for sure if they had an extended conversation. They did have moments of chemistry but their interactions were such hit and runs, nothing ever felt flushed out. The beat in their relationship just felt off.

Allison and Liam were two very analytical characters and that could be why they were harder to connect with as their thought patterns were pretty decisive but it also had them coming off a bit stiff. The over abundance of villains and obstacles thrown in their way was too much and clogged up the story. Allison had to battle her aunt and uncle, a jealous fellow student, and the FBI, all too much for only 300pgs.

Even though I felt the heroine was too sweet, the hero was a bit cardboard cut-out, and one too many bad guys running around, Garwood's writing still has a readability that can't be denied. The story was interesting with action and intensity but our hero and heroine didn't get a chance to rise a bit above the antics and emotionally shine.