The Right Kind of Rogue by Valerie Bowman 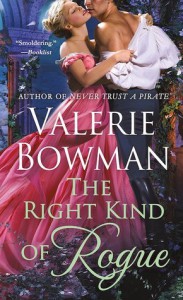 With her family riddled with debt and on her third season, Meg knows it's her last chance to find a husband. When she hears that her long time crush has decided to finally search for a wife, she knows it's time to make her move.
With Hart's sister and friends all getting leg shackled, he knows it's time to do the same. His wife must be beautiful, from a good family, and rich. This makes his sudden attraction to his little sister’s best-friend highly inconvenient.
With family drama, debts, and schemes, Hart and Meg will have quite the journey to get to their happily ever after.

With a gorgeous cover (and a cover dress that appears in the story) The Right Kind of Rogue is the eighth installment in the Playful Brides series. I started off here and had no problems, except for the occasional interest in obvious previous characters that filtered through and curious about their personal stories.

Sarah's older brother, Hart, the heir to the earldom, a viscount in his own right, was clever, handsome, witty, and extremely eligible. He was also entirely off limits to Meg.
She had loved him for years.

Our heroine Meg is the wallflower by circumstance who pines for her best-friend's older brother that never fails to capture my attention. She has no dowry because her father gambled it all away and a mother who unloads her disappoint in life onto her. Hart stuck up for her against her mother when they were younger and that cemented her love of him. I understood the hero worship from this moment but it ended up being the only instance provided for Meg and me as a reader to hold onto. Throughout the story Hart remains a man who drinks fairly heavily and doesn't do a whole heck of a lot to demonstrate any maturity; he honestly seemed a bit vacuous to me.

Most of the story is Meg, with help from a friend named Lucy, trying to set-up schemes to get Hart to notice her enough to marry her and later to sleep with her. Surprisingly, with this desire, they don’t spend a lot of time together in the first half which didn't help me understand what Meg saw in this adult version of Hart. Even towards the end when Hart has a chance to shine and go after Meg, he instead stays home and drinks. It made their romance/relationship seem very childish from Meg's stand point and very weak from Harts'.

This was written in a very easy reading style and if you've read the rest in the series, you'd probably enjoy reentering this world with previous characters making appearances. The friend Lucy helping Meg out was a bit annoying at times with her rude obtuse "My way is always right" but the emphasis on female relationships was enjoyable.

With a lack of mature emotional connection and solid reasoning for why Meg and Hart were in love and Hart not stepping up to the plate enough, I ultimately ended up be disappointed in the romance.
romance series Historical regency Valerie Bowman kyraryker-review