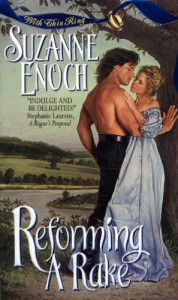 She blinked and swiped her disheveled hair out of her face---and saw her abductor.

"I'm kidnapping you," he said calmly.

"And your little dog, too."

For 40% of this story the hero was unnecessarily rude, the saying "honesty without tact, is cruelty" needs to be written on a chalkboard 100 times by him. There was also an icky feeling to how he pursued and came at the heroine, you know, his employed, at his mercy, governess. He mellows toward the end and gets pretty gallant about working for the heroine but by then, I wanted to deuces him.

For 70% of this story the heroine was strong and leveled headed but when the hero turns the corner and it looks like he really does have feelings for her, she devolves into an angst for angst sake character denying they could ever be together. Seriously, I don't use the term muttonhead lightly, but Muttonhead. It was even more disappointed and annoying because of how good she was earlier.

Now, I don't consider myself a full on perv but for how scandalously rakish our hero was supposed to be and lingering sexual chemistry ( was more tell than show), the first sex scene especially, was over before a lip could finish being bitten. Not the payoff I was looking for (and maybe the heroine, either? I kid, I kid)

Anyway, villains being villains, and hero and heroine having late personality transplants made this more regency window dressing to me. However, the bump up to 3 stars is because Enoch has a style, tone, and emotional (not as many scenes here as in her other books) way with words that charms me.