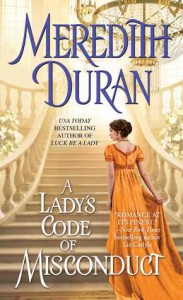 First off, I just want to say, I could weep for how well written this was. I didn't catch a connection to other books in this series but if you read Duke of Shadows, two names (Duke of Auburn and Lockwood) are going to be familiar to you. The story structure, characters, and how Duran interweaved them all together was just plain great story telling. Why I ended up giving this three stars (solidly liked it) is all due to just personal taste.

And so, in the very act of communicating an opinion, she had committed the egregious offense of insisting on her humanity.

Again, why I read romance typically written by women and for women, are the underlining tones of women's personhood and how they have fought for it over the years. With the laws in place during the 1860s, our heroine Jane has no autonomy and has her life and money controlled by her uncle after her parents die. The author doesn't shy away from how crappy women had it and forces the reader to understand what those laws financially and emotionally do to women. Reading women’s pain, anger, and triumphs never fails to hit me in the gut and heart.

Where had this woman come from? Her voice was made of steel and her dignity, unbreakable.

I'm glad I wait until December to do my yearly romance awards because Jane is going to be on my best heroines list with bells on. Her character gets 5 stars for me. From the way she had to survive under her uncle, to deciding she couldn't do it anymore, and how she owned her decisions. She is a bleeding heart liberal who gets knocked sideways by realities a bit but instead of shunning knowledge or being too embarrassed to acknowledge when she is wrong, she takes her licks and keeps on. Her courage was magnificent.

"You've been having a good deal of fun," he said slowly, "haven't you? Convincing the world that you're a mouse."

I loved the beginning of the book before Crispin gets his amnesia. I loved his dark villainy to Jane's avenging angel. You could see where he starts to notice her (my favorite romance moment, when the hero "sees" the heroine in a way no one else does) and through this, the reader gets a deeper glimpse into his character and how he may have some shades of grey.

A squeak came from her. She had made that noise. His lips felt hot. He spoke against her skin.
"Your hair," he said, "is a glory. Promise me you will never pin it up again."
The brush of his mouth sent static sparks along her skin. She felt flushed, shivering, light-headed. "I don't…it would be a scandal."
He turned her wrist ever so slightly, finding her pulse with his tongue. Her breath caught. She heard him breathe in deeply.
"Then unpin it just for me," he whispered.

The reason this got a three star rating from me was because I didn't fully connect with the hero Crispin and the romance between the two. I loved Crispin pre-amnesia and was settled in for some great sparking battles between him and Jane. When his amnesia reverts his personality back to before perceived betrayals (which kind of confused me, didn't all the betrayals happen before the 5 yrs he couldn't remember? Wouldn't the bitterness still be there for him? Felt kind of odd that he would only develop the bitterness the last couple years) and he lacks the dark bitterness that turned him distrustful and produced his self-isolation. It felt too easy; I wanted the journey and the work more. Since it wasn't "my" Crispin, I didn't feel the romance the way I think I should have between him and Jane.

But the newspapers craft their headlines to sell papers, not facts. If crime has gone up in London, it has not gone up to such an extent that we should repeat the mistakes of the past.

****
It would be difficult, after working alongside the poor, to forgot them in the halls of power. Impossible, too, to think of politics as a game, rather than the machinery through which real lives could be saved or squandered.

Along with Jane’s character, I loved the political tone in this. The subtle jabbing Duran directs towards certain thoughts and ideologies. The pointed reminders of what the point of it all should be and the recriminations of how some people in power can shape and mold opinions and laws toward their benefit. There is a lot of political talk in this one, but in my opinion, the story only flourished from it.

He had never realized how much could be communicated through touch, how much trust and warmth could travel through a hand simply laid over one's arm.

Even though the hero and the romance didn't grab me the way other Duran couples have, there was no lack of her beautifully emotional lines.