Romancing the Scot by May McGoldrick 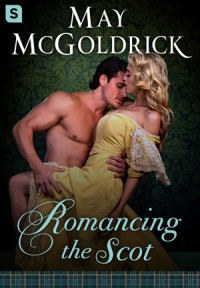 The Napoleonic Wars are over but the political maneuverings are far from, Grace and her father are traveling with messages from Joseph Bonaparte to his wife Julie. They are attacked and Grace ends up hiding in a crate that gets shipped off to Scotland. As the daughter of a French cavalry officer with Jacobite ancestors, Grace finds herself in a perilous position when she awakens in the home of a former English cavalry officer and current judge.
Hugh still blames himself for not being able to rescue his wife and son during the war; he therefore likes dangerous hobbies such as ballooning. When an unconscious woman is found in the new basket he had delivered, he can't help but be drawn to her.
Grace and Hugh may have been on opposite sides of the war but their serendipitous meeting will have them joining together.

"I shouldn't have kissed you," she finally managed to whisper.
"No, it was I," he said, his gaze still setting her body aflame even from two steps away. "But I don't regret it, and I don't think you do, either."

First in the new Pennington Family series, Romancing the Scotis a rich and intriguing tale. Hugh is our viscount, former cavalry officer, and current judge hero, whose parents you might remember from the authors' Scottish Dream Trilogy. I greatly appreciated the authors' attention to Hugh as a judge. We don't get a courtroom scene but instead an engaging look at how he approaches his cases, specifically through a case involving a deaf and mute woman accused of murdering her child (in the author's note, the case is said to be based on a real one). This approach not only allowed Hugh and Grace to bond through solving how to work the case, showing how Hugh appreciated Grace's mind and abilities, it also added unique details to an often written about time period.

While Hugh provided the calm and commanding demeanor, Grace gave us the action and compelling components. She at first claims amnesia because she fears that her father fighting for Napoleon and her Jacobite ancestors might land her in trouble but can't keep lying as she grows closer with Hugh. Grace was a wonderful heroine who didn't need to be dramatically overwritten to show her brilliance in strength living the everyday life she was placed in. She traveled with her French cavalry father, fighting sicknesses, helping wounded, and marching in the muck like many of the women in her time did; she's utterly capable but also so human in her vulnerability. The story's drama comes from Grace running from men who killed her father and her thinking they're after a huge diamond she didn't know until later she was transporting. There are English and French spies and some machinations.

The story started off right away at a bit of run and it did jolt me a bit as I had to attempt to place the characters and what exactly was going on but it does level off fairly quickly. The middle slowed a bit as I thought more of a focus on the romance between Grace and Hugh could have sparked vivacity but I also greatly enjoyed the feel of history in this historical romance. There's a mention of the Spa Fields riots, the workings of the law I mentioned, and a focus on the Scottish Clearances. If you read a fair amount of Scottish historicals from the 1800s, you've probably run across this historical event, what made this feel different was instead of just reciting what the Clearances were or did, the authors' focused on the actual people and effects, it felt more intimate. The historical components in this story felt true and woven in a way that immensely added to the feel and created a richer story tapestry.

I thought the middle could have used more romance between our couple but I also believed in them when they made love, the writing sometimes veered toward flowery/purple, the plot was weaving and intriguing, and the historical components highly enriched the story. Hugh's sister Jo was a touching character in her own right and with the set-up (adopted, broken engagement) the authors' have alluded to, I can't wait to read her book. Romancing the Scot was just an all around interesting read and a strong beginning to the Pennington Family series.
romance series Historical May Mcgoldrick scottish kyraryker-review
Tweet