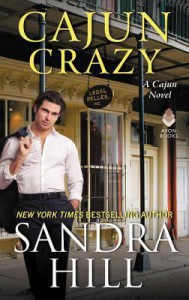 After catching her boyfriend cheating on her, Simone decides to fall into her mother's guilt trip and goes back home to take care of her after her knee surgery. For a woman with three failed marriages to Cajun to men, her hometown in Louisiana is a dangerous ground zero.
After Adam's wife dies, he and his daughter move in with his father. As a lawyer and half Cajun, he never has a problem with the ladies.
Simone and Adam have hot and spicy chemistry but with deep trust issues on both sides, their happily ever after will be a battle.

There was something about a man who could say darlin' in a husky, slow croon that could make any girl melt.

The eleventh installment in Sandra Hill's Cajun series is chalk full of the wild, fun, and spicy elements we've come to expect. There are numerous previous characters making big appearances here and some character history that would be very helpful to know. You wouldn't need to have read all the stories in the series but a couple would greatly enhance your enjoyment of this book.

Our heroine Simone is a cop who is tough and capable but has a weakness for Cajun men. Her three marriages burned hot but flamed out quickly and with her last boyfriend cheating on her, she is trying to swear off men, specifically Cajun men. I liked Simone with her tough vulnerability.

Our hero Adam stayed in his marriage even after he found out his wife wanted to be in an open relationship because he didn't want to maybe lose his daughter. After his wife dies, he likes to keep things only casual with women. Adam was at turns sexy, strong, and sensitive.

Cajun Crazy had a fun wild tempo with crazy characters (if you're a reader of the series, you know Tante Lulu steals the show a lot) and antics. So much so, that the romance kind of played second fiddle. Hill has created such a strong world, that the town and characters steal the spotlight. Simone and Adam didn't spend as much time together as I typically like and as a consequence I felt their relationship lacked depth; when the "I love you" statements come, they didn't seem believable.

I also had personal dislike moments with Adam's comments/thinking that his wife was a slut because she wanted an open relationship or because she liked less than conventional bedroom antics. As everyone was of age and consensual, it felt extremely judgmental and a simple not for me or hurt and angry that he felt lied to by his wife would have had Adam coming off better. Adam's thinking occasional spills over on to Simone when he thinks she also sleeps around and again we have quick slut-shaming. It all gave me an uncomfortable and icky feeling.

The ending had a bit of a meaningless danger moment but the overall story was fast paced and had a plethora of interesting characters to follow along with. The romance was a bit weaker but if you're a frequent reader of the series, you'll greatly enjoy visiting these wild, crazy, and loving Cajuns.

A Cajun playboy who was a devoted single father? The deck was stacked against her.