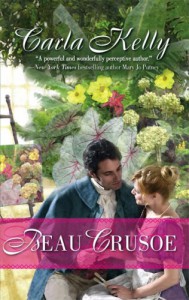 She smiled, and James felt his heart turn.

Susannah Park married below her station, had her husband die before she even gave birth, and has been ostracized ever since.

Maybe because I recently read one of her books, this felt like a Balogh with some Milan. Y'all, the tongue-in-cheek humor and wit is top notch here. This is also told mostly from the hero's pov, which helped to give it a fresh spin.

"Maybe it's this way, son---when we have no choice, we may as well be brave."

James has PTSD from what he had to do to survive and thinks he is haunted by another survivor of the original shipwreck. James' story of survival is spread out throughout the story until we get the ultimate grizzly details of how he became the lone survivor. It's rough, disturbing, and courageous stuff to read and I enjoyed how the author didn't shy away from James' emotions.  He was a hero who was witty, courageous, strong, utterly capable, and kind; he's a sexy one.

Susannah plays a little bit of second fiddle to James but her calm, vulnerable, and solid demeanor made her a perfect complement to him. Her family dynamics were a secondary character that wonderfully filled this story with even more emotions and relationship nuances. I'm also not the biggest fan of children in stories but Susannah's son Noah was a fun character and their relationship and the one that develops between Noah and James was delightful.

The romance between James and Susannah started off as smoke that slowly but surely was tended into a sparking burning pleasing fire. They were such a lovely engaging couple to follow along with. The wit provides a lighter tone while James feeling haunted and Susannah coming back from scandal with society and her family (Susannah and her sister's relationship brought a tear to my eye at the end) provide the heavier emotional load. The secondary characters here add a lot and show how much a story can be enhanced when giving attention to the details. This was a refreshing, engaging, and just plain lovely story.

As she stood watching, he turned and blew her a kiss. You're a rascal, she thought.