Once Upon a Christmas Eve by Elizabeth Hoyt 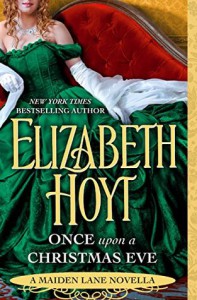 Disillusioned early on about rakes, Sarah St. John has always given Adam Rutledge, Viscount d'Arque, the cold shoulder. When he shows up unexpectedly at her home and is forced to spend Christmas, the complicated feelings she's always had, start to get even more complicated.
Adam would do anything for his grandmother; even spend a week celebrating Christmas at the St. John residency. Thinking to entertain himself challenging Sarah, he soon finds it backfiring on him, as he's the one left feeling outgunned.

The last installment in the Maiden Lane series, you could easily pick this up as a standalone; you would miss an early glimpse of d'Arque in a previous book but there is really no connection to the series overall.

Sarah St. John should have been utterly forgettable.

This is a novella slightly under 100pgs and I'm here to tell you that you're going to end up feeling cheated. The weather is cold, there is a search for some holly and an ending Christmas Eve ball but I did think this lacked a solid holiday read feel. However, this doesn't matter because the reason for the season is d'Arque. Nothing else. The absolute caring way he treats his grandmother was shown brilliantly and provided some depth of character. His sheer sexiness though, steals the show. He's able to keep himself rather emotionally contained, except when he gets around Sarah and then we get to see cracks form in the façade; I live for the cracks. He's sexy, smooth, sparking, and a bit unraveling when he's with her and I loved every second of it.

Sarah was the perfect combination of stiff and melting when she was around d'Arque. Her past hurt helps us understand why she tries to keep d'Arque at a distance but it also ends up feeling rushed and forced as the emotional pain isn't given enough room to develop with the small page count. I loved how she stepped up to d'Arque's challenging but also how she softened to his touch. Her family round out the secondary characters and I missed seeing more interactions with her sisters as I think this would have filled out her character even more.

"Careful, sweetheart," he rasped in her ear, his breath brushing her neck, and it was strange because she could've sworn there was real concern in his voice. "you nearly fell at my feet just then."

There's some mini trials and tribulations going on in this novella but the core of the story and why you're going to want to read it, is the interaction between Sarah and d'Arque. They are the couple who give you shivers up and down your spine. They snap, spark, crash, and melt together in a way that make you want to reread their story as soon as you finish. I will spend more time of my life than is healthy wishing the author had chosen to write a full length novel for them. There's a point where d'Arque says:
"I want you." He fought to keep his voice level. Civilized. "In every way."
The way this is dragged out of him had me thinking of Sebastian St. Vincent. In a full novel, I think d'Arque would have seriously challenged St. Vincent in the eyes of many romance readers for favorite rake.

Hoyt is very good at small impactful emotions and outside the main couple's relationship, there is a scene where Sarah's sister starts to blame herself for a man's actions and after her family support, their mother says the line: "I shall have to warn my friends about him.”. This may be a case of what's in the news timing but this little scene hit me in the feels. The women's network; created out of necessity, caring, and bravery. In the past and present, sometimes we women have been the only recourse and this added scene is again one of the numerous reasons I read romance, it understands, tells, and celebrates us women.

Look, issues get brought up and moved on from quickly (d'Arque's parents' death) and the ending is so outrageously abrupt. Seriously, Hoyt gives us one of my favorite proposal lines ever and then slammed me into a "the end" wall. I loved what Hoyt gave me of d'Arque almost as much as I hated how little she gave me of d'Arque. At the end of the day though, if you're looking for a quick escape, d'Arque won't disappoint.

He broke their kiss and laid his forehead against hers. "Make me stop."
"I can't," she whispered.
"Then we're doomed," he said, his voice husky and low. "For I'm unable to stop myself. I want you. Day and night and all the time in between. I want you."
3 likes
romance series Historical Elizabeth Hoyt arc 1700s kyraryker-review