The nights are starting to cool here and salads are beginning to fade away in favor of oven delights. 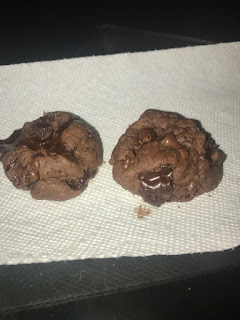 It is the bf's birthday week and as a chocolate fiend, this was one of the desserts he requested. I chilled the "dough" (I put this in quotation marks because, dough? Lol. More like small ball of chocolate) for three hours and had no problems with the cookies flatting too much. These are only for the hardcore chocolate lovers among you. I can only eat one bite at a time because they are so chocolatey; they are not cookies to me but balls of chocolate chunks. I think the bf strives on getting me to create the biggest chocolate monstrosities out there. Easy to make but remember to chill dough. 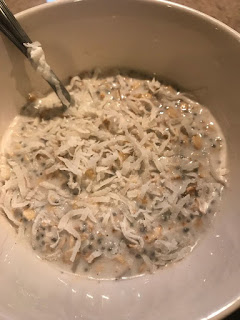 This is much more my speed. I let the oats soak overnight and had it for breakfast, it was a bit too sweet for me as a breakfast food but would make a great nighttime craving snack. I added extra coconut on top and a sprinkling of white chocolate chips. Tasted like a more healthy cereal. 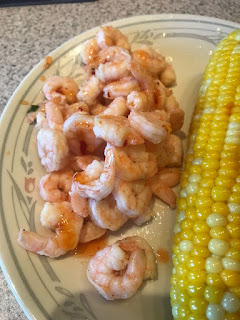 You need to marinate the shrimp for 30 mins but other than that, extremely easy. I would normally have served them over rice (would actually be really good to make shrimp tacos out of too) but we had some sweet corn to use up. Sauce was a little thin so I drizzled more sweet chili sauce over them. Nice light, tasting and calories, meal. 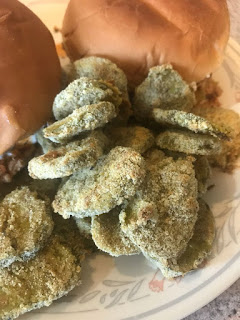 Another birthday pick and shows my love for the guy since I was willing to breathe in disgusting pickle fumes. Easy to make if not a bit time consuming with dipping and coating individual pickles. Healthier option than frying in oil (I always like baked more anyway). I can't comment on how they tasted because of my loathing of the cucumbers corrupted by Satan, but bf said they were pretty good, not better than the Buffalo Wild Wings fried ones, though. Sigh, leading a man away from his fried food is not for the weak of heart. 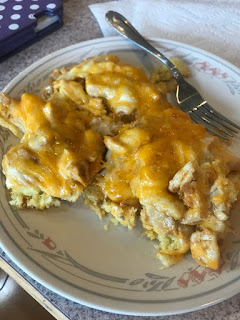 This is the highlight of the week. Holy f*ck was this good. Not particularly healthy, THE CHEESE y'all, THE CORNBREAD y'all, but my god was it spectacular. The cornbread bottom makes this and I happened to make it on a day that was cooler and just make it on some football Sunday and you'll see what I'm talking about. I only put the pie back in the oven for 10 of the 20mins it calls for the second time to not burn the bottom of the cornbread and it was cooked perfectly. I would maybe put some jalapenos in the cornbread mix or drizzle some jalapeno Tabasco sauce on top for next time to add some kick (my favorite statement!) as it was fairly sweet taste overall. A bit longer, a little over an hour to make but worth it. You'll probably see this one pop up again as I'll definitely be making it again in the not so distant future. It had taste, depth, and presence. (How's that for some bullshit foodie talk? ;) 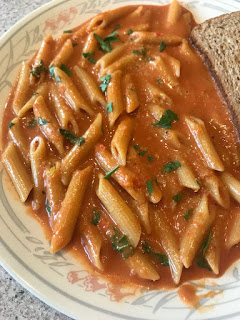 If the tamale pie is the winner of this week's list, this vegan pasta is the loser. It says serves two but only calls for one cup of pasta. Hahahahhahahahaha. No. Mama need more than half a cup of pasta for a meal. I doubled the recipe. The taste was a bit...different, it had a spice/kick to it because of the chili flakes and smoked paprika but at the same time was bland. I don't know, didn't work for either of us. A little over a half hour to make but won't be revisiting this one again.