I've just been rereading old favorites as I've been too busy to do much else, but the light at the end of the tunnel is there and next week I should be able to get back to Halloween Bingo and reading posts, basically existing on BLs again :)  Let me know if I missed anything too exiting or yummy! 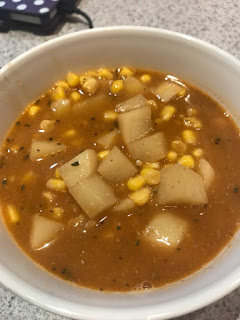 If I remember right, I got this recipe from BrokenTune, check her out if you're looking for some great soup recipes. I was a big fan of the broth with the spices, the chili veggie mix was tasty, I added some chili powder too. The cook time suggested didn't fully cook the potatoes, so they were raw and crunchy which was kind of weird. I'm not sure if that is the way it was supposed be or if I should have just added more time and cooked them fully. I'd definitely make this one again, the hardest part was converting the measurements from g and ml ;) 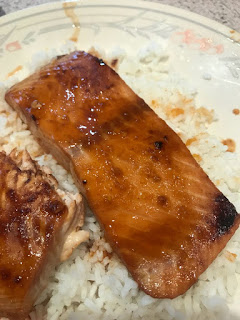 With the thawing of the salmon and then the 20mins of marinating, this takes a little bit of time but I thought really worth it. Sweet and spicy tasty and the suggestion of broiling to add some crisp was ideal. Such great flavoring with this one. I served with rice but the suggestion of asparagus would make a more complete and fancy dancy meal. 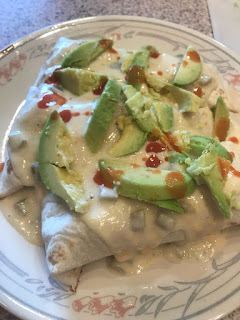 Holy mother of god these were good. I used the slow cooker chicken recipe and did the low for six hours. Magnificent. Don't skimp on the sauce either, so so so so good. As you can see I dropped some hot sauce on top with avocado and made the whole thing that much better. I'll be making these again and you should too. Obviously a plan ahead meal because of the slow cooking but super easy and goes pretty quick after the chicken is done. 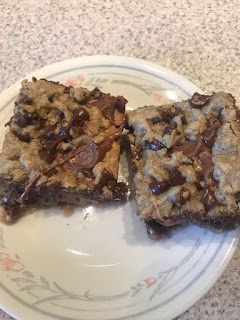 Your dessert monstrosity. These were easy to make but unwrapping all those damn Rolos will make you question what you're doing in life and I couldn't even fit them all in the pan, I had about seven left over. I also had to just about double the cooking time listed because the dough remained doughy for a lot longer for me than the recipe creator. They turned out pretty rich but not the usual unbearably so and since it is only an 8X8 inch pans worth, not a lot to guilty eat. Probably won't make again but fun while they lasted. 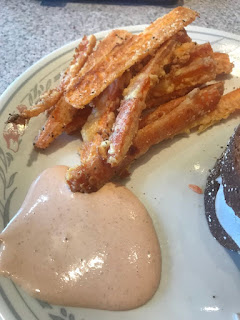 So the smothered chicken burritos are the obvious hit of this weeks recipes but these were the dark horse and they sooooo delivered, even the bf liked them. I did 2 tbls of Greek yogurt with 2 tbls of mayo because I'm not a big mayo fan and added extra sriracha because I am a big kick fan. There were pretty simple to make and with cook time, I'd say only took a little more than half an hour. I don't know about complete healthiness because of Parmesan and dipping sauce but they sound healthy if you tell anyone about them, so a win? I'd make these again.

Any yummy food to tell of?