But seriously, where did September go?!? 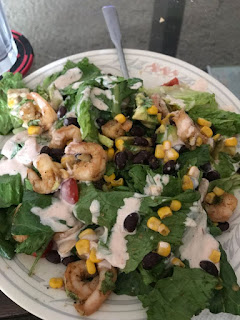 Me trying to desperately cling to summer, might be the last salad I make for a while. Can whip this up within a half hour, defrost the shrimp while you're putting together the rest of the salad. Quite tasty. 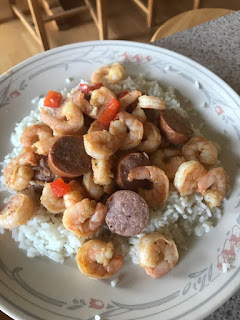 This is another one that you could do in a half hour, I served mine with white rice. I used turkey kielbasa and left out the zucchini. The seasoning had a taste but I left out adding any salt because when the kielbasa fries up, you can taste the salt even more. 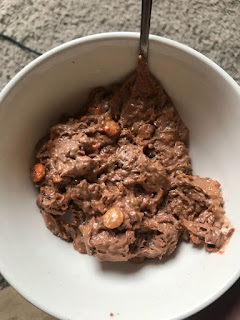 Hmm, k, not the most photographic food, lol. This is for you chocolate lovers. I used chocolate pudding, which made it very rich, go for vanilla is my suggestion. Or go for chocolate, you wild and crazy people, you! I threw in some Reese Pieces instead of the second helping of peanut butter cups. You do have to let this sit for two hours. The recipe says you can dip stuff, apples, graham cracker, and the like but I just went with a spoon. I wouldn't make this again but what a day it was when I ate some of this. 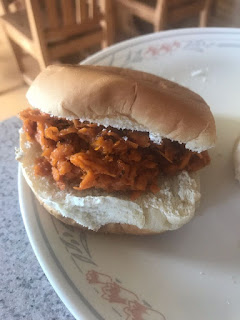 These are so ridiculously easy and quick to make. If you have a family or friend who is a vegetarian or vegan coming to a BBQ or get together, this would be an awesome food item to have for them. I used Stubbs Spicy BBQ sauce and put a light lathering of cream cheese on the bun with a sprinkle of garlic powder, the recipe has a Cashew cream cheese recipe but I didn't have time to make it. If you like BBQ and sweet potatoes, you'll like this, because that is basically all this is. A super easy BBQ recipe to include non-meat eaters. 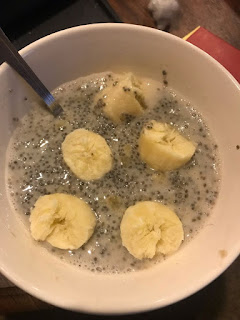 Ugh, still out here questing for a morning or snack pudding. This was one of the better ones but still, meh. Has to sit for a least 7hrs after you mix everything together so I ate it in the morning. Ok, but didn't quite have the taste I was looking for. My mashed up banana didn't mix in with everything super well, maybe my fault, and made it a bit lumpy. I added some more banana chunks in which improved it some. A little blah tasting. 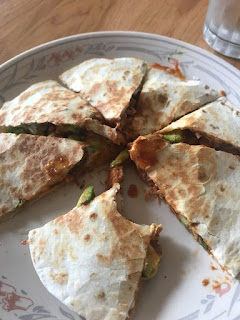 Probably the ultimate winner of this weeks recipes. If you already have some shredded cooked chicken around, these would only take twenty minutes or so, if not add in the chicken cook time. I used Annie's Sweet and Spicy BBQ for these with about a 1/4 cup of Franks Red Hot, Loved the combo. I'm beginning to realize that BBQ sauce and avocados are all I need to be food happy.

Any food highlights from Sept. or looking forward to making in Oct?