Beyond Risk by Connie Mann 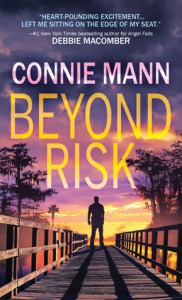 Beyond Risk starts off the Florida Wildlife Warriors series dropping the reader into relationship drama and murder mystery. There are a lot of characters to keep track off and I have to say, I didn't quite get a handle on who was who until the second half of the story. Our heroine Charlee is a former Fish and Wildlife Officer who is starting to take over her parents' business of selling outback supplies and offering guided kayak rides down the rapids. Last year a teenage boy was killed on one of her guided trips and now on the anniversary, another teenager is almost drowned and shot. Last years accident is starting to look like murder and the murderer is back.

Along with Charlee, we have her two big brothers Pete (cop) and Josh (Fish & Wildlife Officer), her younger sister Natalie, an ex-boyfriend who doesn't want to be one, an employee who has a big crush on her, another younger male who has a crush on her (or at least her cupcakes), the two different families of the teenage victims, a father and mother (recovering from a stroke), and last but not least, our hero Hunter. There are some other minor characters but you can tell by that cast list what I was talking about a lot of who to keep track of.

The story does start off right the bat but I checked twice to make sure this wasn't second in the series or if I had missed some prologue story. Charlee and Hunter's friendship starts and develops before this book starts, so when we come in, the ground work is already laid and feelings have already developed, they now have full blown crushes and want to get together. This was disappointing as that is why I read romance, to witness and enjoy the building blocks of romance. The case work of putting the pieces together, racing to rescue everyone of Charlee's family members (dad isn't targeted I guess, but everyone else has danger moments), and searching for a possible murderer; it all started to feel a bit repetitive.

The chemistry between the leads felt pretty dry, Charlee doesn't know if she can trust her instincts towards Hunter. This started to feel very forced as Hunter constantly is great to her and she is always thinking how his actions put her agency first (there is an ending scene to cause some friction between them to angst this up). Hunter has the ever present storyline of not feeling good enough for Charlee, even though he only really pushes her away twice and then actively is trying to be with her. This was fairly clean overall, their sex scene goes by pretty quick and is cloaked in water rafting metaphors, think something about riding the rapids. They came off as probably would work in real life couple but not particularly romantic, inspiring, or fun to read about.

The murder mystery simply had too many characters along with their backstories to explain motivations, it was confusing and not all that believable in certain parts. There were obvious red herring characters but as they faded into the background or were left abandoned, I couldn't help but think what was the point of them as they only clogged up the story. Charlee supposedly has this great relationship with her siblings but they never really interact in many scenes, leaving an empty hole in feeling their relationship. I did enjoy the one or two scenes she had with her mother, these were heartfelt and added to the emotional feel of the story and brought depth to both characters.

Characters felt a bit like they were standing still as the story weaved around them, instead of feeling like they were a part of and guided the story. The building of the romance and relationship between Charlee and Hunter seemed to happened before the reader is brought in and some secondary characters clogged the story instead of added to it. This was pretty fast paced and if reading about two characters who like each other while stop and go driving around trying to figure out a possible murder mystery, with some crocodiles, a snake, and the hero calling the heroine cher (many, many times) making appearances, there is plenty of that here for you.