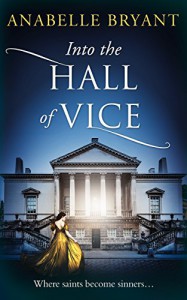 She went up on her tiptoe to peer over his shoulder, though any goal of accomplishing the height was futile. With the motion, her bosom brushed against his forearms, which were folded over his chest in an effort to keep his heart locked in place. There was no hope in accomplishing the feat now. Epic failure, in that.

‘Oh.’She staggered back as if she’d been burned. Perhaps she had. His blood ran hotter than Hades. ‘Excuse me.’