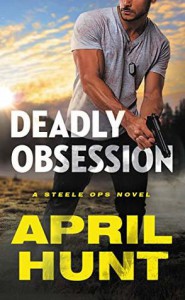 Starting off a new series, Deadly Obsession, introduces us to the Steele family. A group of four brothers, their cousin Grace, and their lifelong friends, siblings Cade and Zoey. After her fifth heart surgery, Zoey decides that she is going to take life by storm. This includes getting out of the Dungeon and taking her crime scene investigating skills top level, investigating crime scenes as soon as they are found. It also includes going for it with the eldest Steele brother, Knox.

Knox has stayed away from D.C. for two years, but his brothers are starting to pressure him to make a decision on joining their new security start up Steele Ops and his best friend's little sister had a set back with her heart, the little sister he has found himself caring more for than big brother Cade would like.

When the Beltway Cupid Killer brings everyone together to work on catching them, Knox finds himself unable to keep resisting Zoey and thinking maybe home really is where the heart is.

If you're fan of romantic suspense, you're going to like this. Deadly Obsession is trope heavy, group of former military men, best friend's little sister, no-strings sex agreement that goes sideways, a teased second chance romance, and a serial killer haunting the edges. Hunt's themes and characters are well traveled but her ease of writing and dash of charm will still have people well read in the sub-genre enjoying the ride and newbies captured.

This was clearly a start to a series book, the focus was heavier on showing and developing relationships around characters rather than more on the outside story. The serial killer gets povs that I thought created a great creepy factor and helped add to the story but in the second half they kind of disappear and we lose this story thread for awhile. I thought the author did a great job with giving clues to who the killer was, it becomes kind of clear about halfway through, then the reader gets to enjoy being in the know and feeling anxiety whenever they appear on the page.

The storyline of Knox staying away for two years was probably the weakest, I'm not sure I fully understood the reasoning. His mess up that endangered other Rangers and then abandoning his brother Roman when he was in a hospital in Germany, was mish mashed together and we never got a clear concise story of how Knox messed up. The tension between the brothers and Knox as they work to set-up their Steele Ops security firm, under the cover of a brewery named Iron Bars, was a little mish mashy too, it is just something you have to go with as the security firm is obviously what will be the hub for the series.

This could never get old. That heat. That excitement every time he touched her. Instead of claiming a new piece of her every time they were together, Zoey Wright, without a doubt, claimed a small piece of him.

I really enjoyed Zoey's character, she has unrequited childhood love for Knox and lusts after him but she never lets him get away with anything, she calls him on his b.s.. It was a sweet additive to have Knox making a secret hospital visit to Zoey too, helps add foundation to him liking her as there is a lot happening in this book and Knox and Zoey's relationship doesn't always get the spotlight it deserves. Their no-strings sex pact felt thrown in, because it doesn't seem to completely fit in with Zoey's feelings, yes she is taking more chances but she seems to completely forget about all those deep feelings for Knox that were fed to the reader earlier. They have some cute back and forth and I believed in their connectivity as a couple. I do wish we could have gotten a bit more of a focus on their developing relationship, they go from pseudo lying to themselves about having sex to just sliding into being together; not a lot of struggle or heartfelt moments.

There were some missing pieces and some underdeveloped characters, Knox's reason for staying away for two years, Zoey's boss Mason seems to disappear, and a character connected to Zoey and Cade kind of just gets thrown in, but overall, romantic suspense readers will feel welcomed and comfortable in this series Hunt is setting up. Zoey lusts after Knox but she doesn't let him get away with anything and Knox is the protective trying not to fall for the best friend's little sister, all surrounded with a hint of danger. Zoey's brother Cade and Knox's cousin Grace look to be the next couple and the tension felt between them here, has me excited to dive into their story.