Every Last Breath by Juno Rushdan 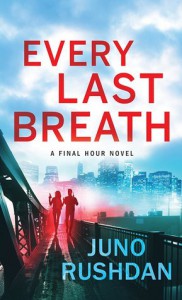 Maddox is an officer for the Gray Box, an organization so deep undercover that most people in the know, don't know about it. Nine years ago Maddox told her father, who she didn't know worked for the CIA, about a gathering of Russian mobsters that resulted in her almost fiance's, Nikolai, father's death and eventually Nikolai's. Maddox sees the work she does for Gray Box, neutralizing threats against the U.S. and taking out terrorists, as repentance.

Cole Matthews is what was emerged from the ashes of his former life but when some Russian mobsters attack him, he knows his cover is blown. When he is recused by Maddox and swept into a fight to stop a bio terror attack, he realizes that the past is never really the past.

They’d been as close as two people ever could be. He’d lived for her, killed for her, and, in a million ways, died for her.

Every Last Breath, is the start to the new series Final Hour and was a high energy, quick moving, and loaded story. There are numerous characters and story threads thrown at the reader right from the beginning, Maddox's co-workers at the Grey Box, the father and son villains, the threat of the enhanced small pox strain releasing, and Cole and Maddox's history. I had some problems keeping all the Grey Box characters and their relationships clear in my mind. Castle works with Maddox and is actually her brother but even though it seems they aren't that close (there was mention of how much Castle took care of her in the past) I still felt like their familial bond wasn't felt, her brother could have been any of the characters.

There is a lot happening in this story, Maddox trying to get Cole, who turns out to be the fiance she thought was dead, to help get her into an underground auction to buy an enhanced small pox strain, Aleksander and Val (the two villains) maneuvering to buy that same small pox strain and then trying to orchestrate releasing it on American soil, and the story thread of a mole in the Grey Box. These action threads pretty much dominate the story. The romance thread of Maddox and Cole having a past and then reconnecting didn't have enough time or breathing room to have me emotionally connecting to them. Their past has them already having feelings of love, we don't really get to see them develop them. They spend a good amount of time together but the hunt for the villains takes up most of the time and emotional energy, what we get is Maddox shying away from trusting Cole after he lied to her about his death and Cole still smarting over what he feels was a betrayal by Maddox and being super protective of her, even though she has the skills and knowledge to take care of herself in this world.

As a romance story, this fell short because Maddox and Cole didn't have the depth and time to emotionally grip me but as a suspense, this definitely had the energy and danger to capture my attention. The beginning is very busy with a lot of characters thrust at you and as the story progresses, plots and threads add up but my attention was still captured. Now that the introductions have been made and characters, along with some relationships, and threads have been laid out, I'll look forward to more of a focus and development of more emotional aspects in the next. This series looks to have the potential to have a lot of thrills.