The Golden Hour by Beatriz Williams 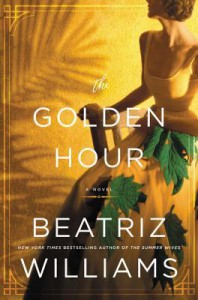 “Was yours ever hit?”

“No. Not a scratch. I suppose even bombs have a sense of irony.”

“Not really,” I say. “That's just human illusion. We imagine there's an order to things, because it's too awful to consider the randomness of fate.”

The Golden Hour is historical fiction that mainly follows two women decades apart while slowly but surely weaving their stories together. We first meet Elfriede in a Swiss clinic where she was sent after she can't feel anything for her newborn and talks about a darkness that dwells in her. Today we would call it postpartum depression but in the early 1900s, no one quite knows what to do with her. There she meets an Englishman recouping from pneumonia and they have a soulmates connection but with Elfriede still married, they can't really act on anything.

The other woman we follow is Lulu in 1941 just as she is arriving in the Bahamas to cover gossip about the scandalous Duke and Duchess of Windsor, Edward and Wallis Simpson. There she gets caught up in possible treasonous acts and meets Benedict Thorpe, a man she thinks is more than he is letting on.

It's so easy and so safe to fall in love when the universe is against you.

While Elfriede's story is relayed from the beginning, chronologically, we start more towards the end with Lulu's story and are constantly backtracking and shooting forward to gain information on how she ends up in London with Benedict's sister, which is where we first meet her and the mysterious government agent, Mr. B. The pov changes also include first person and third person different narratives; it works to keep the two women drivers of their own stories but I can see how this could affect the flow of the story for some.

While Lulu and Elfriede are fictional characters, they are surrounded by real events and real historical figures of their times. World War I plays a part in Elfriede's story, affecting her life's course and World War II obviously plays a big part in Lulu's story. For the most part though, the gravitas of the Wars are kept to the outside, Pearl Harbor is discussed but being in the Bahamas during the time and lack of Internet keeps the news to feeling surreal. The focus is more microcosm and how the Wars are personally affecting these two women and how it will connect them.

I thought it was intriguing how the author made the Windsors, somewhat, central and key, along with the real murder mystery of Henry Oakes; little moments in history that aren't completely solved are fun to read different takes on.

“Life is made up of these little crossroads, after all,” he said. “A million daily forks in the road.”

The slow weaving of Elfriede and Lulu may feel meandering for a while, I thought the latter half started to drag a bit but it was still curiously interesting to see how the author ultimately ended up placing all the characters to culminate in the ending. The ending was rushed and key emotional moments were crammed, taking away from the reader from getting time to digest and deliver a bigger impact on key moments. However, if looking to disappear for a few hours, The Golden Hour will keep you intrigued about how all these characters touch and impact each other's lives and how it could feel so helpless and hopeful all at the same time during World War I and II.