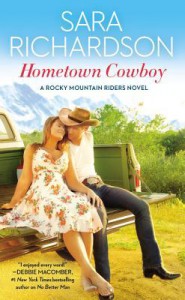 Jessa was just dumped by text and for someone who has such an open heart, she sure has trouble finding someone to love her back.
Ever since Lance's mother left without looking back, he's been a love them for one night and leave them.
When Lance needs help watching his father, Jessa is there and he's starting to enjoy her at his home more than he should.
Jessa loves love, Lance wants to be a loner, and long held family secrets are bubbling under the surface as these two heat up under the Colorado sky.

She might have sworn off relationships, but technically she hadn't sworn off kissing.

I enjoyed how this one started off, we're introduced to the Cortez family of Lance, his younger brothers Lucas, Levi, and their father Luis. With Luis out following the rodeo circuit as a champion bull rider, their mother couldn't handle the stress of raising three boys alone and leaves. As the oldest, Lance feels it is his responsibility to take care of the family but Levi has serious anger issues with his father and ends up burning down a barn. The three boys decide Lucas will take the wrap as his record is squeaky clean but things go sideways when he gets charged as an adult and ends up going to jail. When he finally gets out, he leaves not wanting to deal with the small town always looking at him like he is a criminal, Levi can't stand the guilt and constantly travels on the rodeo circuit, which leaves Lance to run their ranch and work on becoming the best bull rider like his dad. I wish there had been more detail to Lance running the ranch and his bull riding career. They're mentioned but not really done anything with, we get a few glimpses of Lance practicing for World's, championship rodeo in Las Vegas, but I didn't understand how he ran the ranch year round and was such a top bull rider, when would he have time to travel to rodeos?

The Cortez family drama kind of overshadowed Jessa, she grew up spending the summers with her father and school year with her mother, she craved a big stable family. Her father just died and she is trying to take over his animal rescue, Lance's father Luis tries to help her out with it. Like Lance and his ranch and rodeo, there wasn't much to Jessa's animal rescue. We know she needs money to keep it running but other than carting a pig around, it was definitely pushed to the side of her life and the story. Her friendship with two other women, helped to flesh out her character more but they never seemed to have longer, in depth scenes together to endear them to me more than series baiting.

It's a gift when someone believes in you at a time no on else does. When you've lost some of the belief in yourself.

I thought the first half was just a lot of lust attraction making up Jessa and Lance's relationship. Jessa is supposedly on a break from wanting a relationship and Lance is supposed to have this hardened heart but the storyline of Jessa not wanting a relationship seems abandoned almost as soon as she says it. I'm not sure until the very end I felt any depth to Lance's feelings for Jessa. They are thrown together because of circumstance and they never evolved for me beyond “sexy legs” and “hot bod”.

This was an easy quick read, the outline for a deep emotional story was there but the depth and building blocks never showed up. The big ending had me disliking Jessa's character a bit as she acted fairly inconsiderately towards Lance and very blindly towards one of her friends, all because she “knew” she was right; family dynamics are tough waters to wade into and I just didn't think she gave it the consideration it deserved. There was nothing new or exciting to this story but, like I said, the outline is there for deep emotion with the Cortez family trying to heal from the lie they told that fractured the brothers. Details, depth, and fully fleshed out characters were absent in this one, but with two brothers left single, the author has a nice setup for their stories.