How to Catch a Wicked Viscount by Amy Rose Bennett 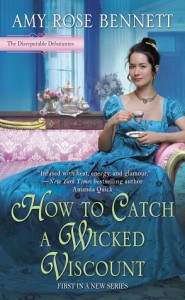 Sophie was sent to a young ladies' academy to hopefully make connections so that she can marry well and save her family from impoverishment. While she makes three great friends and they form the Society for Enlightened Young Women, they end up getting expelled for breaking some rules. Now three years later, she may be forced to marry a man she despises to save her family. When one of her friend's invites her to London to spend the season with her, Sophie jumps at the chance.

Nathaniel is a man of his day, he is a viscount, an heir, fought in Waterloo, and lives a life of gentlemanly leisure. However, when some of his antics catch his father's attention, he is given the ultimatum to grow up or be cut off. He doesn't want to marry quite yet but his younger sister's friend is having him thinking thoughts he never has before.

The first in the Disreputable Debutantes series, I enjoyed the friendship between our heroine Sophie and her three friends. We are introduced to them at the ladies' academy and how their curiosity and wanting the same knowledge as their male counterparts gets them thrown out and causes severe consequences for them. I liked how the author aligned the juxtaposition of the rather mild actions of Sophie and her friends with the debauched antics of Nate and his friends and the severe consequences the women faced and the almost complete lack of any for the men. This had me feeling for Sophie but even though Nate was a man of his time, I struggled with how immature him and friends came off and how childish their bets and pranks were.

She bit her lip to suppress a small smile. It suddenly occurred to her that perhaps the viscount might be a little bit infatuated with her too.

The friends decide to hone their flirting skills on rakes, the excuse of already having a scandalous reputation for being thrown out of the academy as their reason, and Sophie's friend caught Nate in Sophie's room due to a drunken mix-up and decides to blackmail him to help them in their quest. This was all a bit shaky to go along with and neither really pans out as the story goes along. I had the same issue with Sophie writing a child's novel and Nate's pain from Waterloo. Both were introduced and occasionally revisited but felt more like afterthoughts in the story, they ended up feeling like “what was the point?” because they didn't add any emotion to the story.

Well, she wouldn’t beg. And if Nathaniel Hastings had a change of heart, he knew where to find her.

With the consequences of Sophie and her friends' actions, along with the lifestyle of Nate, this did have more of a Regency time period feel to it. There also felt like a hint of naughtiness just around the corner. In the beginning with Nate and his friends, there was some threesome talk and just an overall vibe of sexuality. However, I didn't think it completely compromised the historical mood and I actually thought it gave this a bit of a fresh feel because of, for the most part, keeping it to more of teasing the idea. I did struggle with the ending; throughout, Sophie and Nate acknowledge the danger of acting on their feelings only to, what felt like to me, act in a way that wildly went against what felt true to their previously written characters. This not fitting into the fabric of the story or characters ruined any romance I was supposed to get out of it.

Overall, I believed in the lust attraction between the two but not sure I felt the depth of emotion, Sophie and Nate never spent enough quality time together to build this up for me. Sophie's novel writing to try and save her family and Nate's Waterloo pain felt more like footnotes than incorporated into the story enough to provide emotion but the covertly contrasting of consequences for men and women of the time was nicely done. The author lined up enough secondary character series baiting teasers that I will find myself picking up the next Disreputable Debutante's story. There was some emotional depth missing for this but Nate does read Pride and Prejudice, Sophie mentions it is her favorite book, because he is missing Sophie and I can always get enjoyment out of a reading hero.