The Tiger Catcher by Paullina Simons 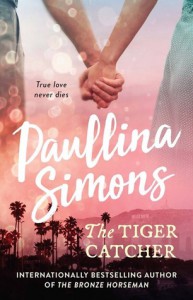 There'll be another time for you and me.

There'll never be another time for you and me.

In what is a planned trilogy, The Tiger Catcher introduces us to Julian and his love and obsession for Josephine Collins. From the moment he sees her on stage he is captivated and can't believe when he sees her again months later across the country in a book store. Simons' has this couple's story swirling questions of fate, destiny, mere coincidence, or eons of soul searching. Written in an ephemeral tone, the sentences are shorter at times and moments with and between Julian and Josephine felt like short bursts of energy; the texture of the story takes some getting used to.

The majority of the story is told from Julian's point of view which I think hurt my personal connection to Josephine but probably works for what the author is going for in regards to the overall series structure. After Julian reconnects with Josephine, he immediately breaks up with his girlfriend and becomes consumed with her. He has a very close friend named Ashton that from the beginning is very wary of Josephine and at first you'll probably read it as jealousy; Josephine also has a friend, Zakiyyah, that reads the same way. The story takes a turn, however, and details are revealed about Josephine and the bubble Julian has been living in gets popped.

Be careful who you pretend to be.

The beginnings chaotic happiness is contrasted with the middles abject grief and Julian ends up wandering London and addicted to Klonopin as he deals with the loss of his Josephine. With the knowledge the reader now has about Josephine, there won't be much empathy for this character and Julian's views, thoughts, and emotions start to read very skewed; the beginning feeling of soulmates will be questioned. The writing style of this part made it hard for me to really connect to the characters and therefore this extended wallowing made the story drag. If you have read Simons before though, you'll know that little, seemingly innocuous details, can later have high importance, this thinking kept me locked in.

Julian was no one on a river of nothing on the way to nowhere, all because a Hmong shaman said, you want to see her again?

The later half brings in the mystical aspects that the writing style and tone were working for and the pace started to pick up again. I love when author's take real things, like the Prime Meridian and Transit Circle, and infuse them with myth while utilizing them in fantastical ways. The story shifts from grounded in reality to time travel as the Hmong shaman, Devi, Julian fortuitously or destined found his way to, tells him that while Josephine may be lost to him in this world, he can find her in another. The story then shifts to the year 1603.

“But they still won't be cheering for you, Lady Mary,” Julian says. “They'll be applauding for the thing you're putting on for them, for someone else. Don't you want to be loved for the young woman you actually are?”

“Don't speak to me so presumptuously about love,” she says. “And no, I want to be loved for the woman I pretend to be.”

This part of the story I really struggled with, as even though, Mary (aka Josephine) is supposed to be more immature, it makes Julian's obsession with her even more frustrating. If it is the author's intent to make you feel this way because the payoff and understanding develops in the second or third book, I suppose that is understandable since reader's go in knowing this is a trilogy but it still makes this first book a struggle to get through. This latter thirty percent or so, was all Mary being a brat and introducing the idea that maybe we can't change the threads of our fate, predestined is predestined. Heavy questions but not relayed with very enjoyable characters to read about; my relationship with even Julian became very frayed here.

The story ends with Julian leaning toward a possible cataclysmic decision. The fabric of the story and characters was a little murky at times and I wish we could have gotten to know Julian's friend Ashton better (the real love of Julian's life perhaps?). Their friendship was the highlight of the story for me and the only one that rang true. What I found missing could easily be by design because of the trilogy aspect but I'm not sure I connected with or was pulled in enough to read on in the series.