The Rogue to Ruin by Vivienne Lorret 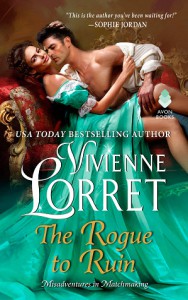 Third in the Misadventures of Matchmaking, The Rogue to Ruin, stars the eldest sister Ainsley and her pesky across the street neighbor Reed. I was a new reader to the series and had no problem jumping in here. The author seamlessly involves the reader into the story of Ainsley trying to keep her matchmaking business afloat after her two sisters (heroines of book #1 & #2) ended up marrying two clients. Ainsley blames their lack of business on Reed and his gaming hell across the street. Reed also isn't a fan of having a matchmaking business across the street but his enjoyment of sparking Ainsley's fire more than makes up for it.

Reed's business is flourishing, Ainsley's is sinking, and they both seem to be enjoying their war a little too much.

Reed Sterling had seen her flinch. What were the chances that he would simply forget about it?

New to the series had me missing out on some past relationship knowledge, I would have liked more with her sisters and a clearer picture about her father, but I also came to Ainsley's character without preconceived notions. She's very buttoned up and seems to have some unwarranted animosity towards Reed, her solely blaming his business for her lack of clients seems a bit forced as the story goes on, but the author let's us in on why Ainsley holds herself so protectively pretty early on. She lost her mother at an early age and circumstances had her having to take care of everything with too much responsibility falling to her shoulders and she had an abusive fiance. I thought her guarded heart attitude was understandable and it made how Reed treated her even more heartwarming.

From the day they’d met, he’d wanted to unwrap her. Not only her prim and proper clothes, layer by layer, but all the thoughts she kept buttoned up as well.

Reed's background was more clear but like with Ainsley and her sisters, I would have liked more scenes with his friends Finch, Raven, or others to get a more rounded out look at his character. Ultimately, though, we're all here for the romance and the way he teased and gently handled Ainsley, will have you ardently in his corner. Romance more often than not likes to have the hardened hero be gently loved out of their cocoon, here it is flipped with Ainsley afraid to lean on him after having to be in charge for so long and scared to trust a man after her father and fiance. Reed has some issues with not feeling good enough for her but he consistently is there for her and not only talks the talk but walks the walk showing she can trust him.

“That’ll be enough. Give her over,” Mr. Sterling said with an impatient gesture, crowding the doorway. “It took a long while for me to earn her trust, and I’ll not have you undermining my efforts by spoiling her more than I do.”

“With the way she’s been mistreated in the past, it’s no wonder she doesn’t trust easily. Why, just look at her. Anyone can see that she requires tender care. I can hardly believe she could ever be comfortable with a rough and burly man like you.”

“Are we still talking about the cat, highness?” he asked, stone-faced.

The first twenty percent of this was glorious with their verbal back and forth that lead to the middle being physical reaching out to touch and nervously retreating back, and finally the later half of trusting and loving. I did think Ainsley created a little too much angst towards the end with not trusting Reed, it seemed only a couple chapters before, only because it had felt like the author had written away that obstacle, that she had overcome this. Around the 60% I felt like the pace had slowed, their sexual relationship gets a lot of focus, that made the extra angst feel even more of an impede. The ending rushes up with Ainsley searching deep, realizations, surprises, and a sweet epilogue.

I will definitely be searching out the other books in the series and be hoping for future ones starring some secondary characters we met here; Raven and Lord Savage, pretty please. The chemistry between this couple was sparking and sweet, which made for an emotionally delightful story. If a protective of her heart heroine, very patient hero, and their idea of foreplay is some sexual tension filled bantering, grab this one up.

There was always something between them—class, profession, animosity, frustration. Yet when his bare hand had been on hers, there was something there, too.