The Immortal City by Amy Kuivalainen 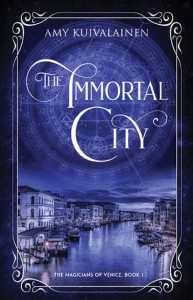 The discovery of a piece of tablet that Dr. Penelope Bryne found on the ocean floor has her claiming it is from the lost civilization of Atlantis. Trying to get funding, she gives a lecture on her findings but is made to look a fool when an audience member directs the conversation towards magic. When an Inspector in Italy emails about a gruesome murder in Venice, she flies on the first plane out of Australia when the writing and symbols decorating the murder scene match the writing on her tablet.

Alexis is known as The Defender and for thousands of years, he has tried to keep any knowledge about Atlantis from the public. As one of the surviving magicians from Atlantis, he feel it is his sacred duty. When Dr. Bryne's discovery gains attention, he immediately tries to destroy any credibility she may have but he can't ignore the feelings he has for her.

Ritual murders and long thought enemies destroyed will have Penelope and Alexis working together and also fighting the magic happening between them.

The Doctor and the magician eyed each other, neither moving.

The first in The Immortal City series, we are first introduced to Penelope who is fighting to prove Atlantis existed and trying to help an Inspector Marco with a series of ritualistic murders. The set-up to get Penelope to Venice and involved in the murders was a little loose and her involvement lessens to a degree that made it feel a bit weak. I did enjoy the secondary character of Marco and how he helped fill out the story but at times he felt more colored in than Alexis, who should be the co-star, with Penelope, of the story.

We learn the basics of who Alexis is, an immortal magician from Atlantis, but a solid backstory is left to around the sixty percent, where we learn a little bit about his life in Atlantis and how he was picked to become a magician. The other six magicians, with Nereus being their leader, were rounded out well and they did intrigue enough to gain some interest in their future books.

“A man appears in my meditation, turns out to be a real-life magician from Atlantis who wants my help hunting down priests of a demonic cult,”

The gist of the plot is Penelope trying to help Marco translate the writing at what appears to be ritualistic murder scenes (the author gets pretty gruesome in describing these scenes) with Alexis coming in as he's been keeping tabs on Penelope and trying to figure out how the murderer could possibly know about Atlantis dark magic. There's the mystery of could it be dark priests or demons of a cult, called Thevetat that the magicians clashed with and brought down the demise of Atlantis but thought to have died there or if the killings are just supposed to scare people in a political power move. The inclusion of how Venice should be structured because of rising water levels with DIGOS and MOSE was more confusing than adding another level to the story, I thought this whole part should have been left out in favor of just going with the magicians versus Thevetat and more of a backstory to them in Atlantis.

“We do this together, Penelope Bryne, or not at all.”

Penelope's character came through strong but for most of the story, I didn't have a strong feel for Alexis and this caused some lack of emotional connection between the two for me. They are said to have a destiny knot and that seemed to be more of an explanation for attraction between the two than I wanted; would have liked to have felt their growing attraction to each other more through scenes.

Some of the middle, forty to sixy percent, dragged for me as we didn't have much momentum in the murder mystery and rehashed a lot but then we get more of Alexis' backstory and the magical, fantasy elements were included more and it did become interesting fiction reading. Alexis and Penelope's romance felt underdeveloped to me and there seemed to be an overall polish to the story that was missing but the author has set-up a curious world with magicians, demons, and Atlantis.