A Duke By Any Other Name by Grace Burrowes 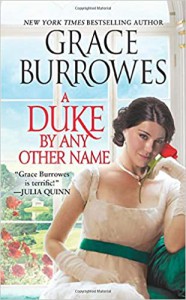 “Lady Althea Wentworth is, without doubt, the most vexatious, bothersome, pestilential female I have ever had the misfortune to encounter.”

When her brother unexpectedly inherits a dukedom, Althea is thrust into the world of social splendor and social backstabbing. She spent most of her childhood trying to survive and protect her siblings, so the intricacies of navigating jealousy and competition for bachelors is beyond her. Having a duke next door, even if he is a recluse, could be the answer to her problems, though.
Nathaniel wasn't supposed to be the duke and he is starting to chafe at having to wear the mantle. When he finally descends on his neighbor to tell her to keep her pigs in her own yard, he can't help but finally feel alive when sparing with her.
Secrets that are starting to feel constraining and a chemistry that can't and doesn't want to be ignored, are heating up the Yorkshire moors.

Following the Wentworth family and their friends, the Rogues to Riches series delivers its fourth installment staring Althea, the oldest sister. In previous books, she was the straightforward sibling that could come off a little abrasive. In her own story we get a look at how she was left to take care of and protect her younger siblings from their alcoholic father while their elder brother Quinn (My One and Only Duke) went out to try and make money. When her family inherits the title, she becomes Lady Althea and not only gains the prestige but jealousy, with one particular enemy in a Lady Phoebe. With Phoebe making snide remarks and spreading innuendo about her, Althea needs help with learning how to navigate polite society as she does want a husband and family.

Nathaniel is Althea's neighbor on their estates outside of York and is a recluse as he shuns society. At first he seems like a grumpy bear just wanting to hibernate but when we get a pov from his mother, that hasn't been back to the estate or seen her son in years, we get a tease that maybe Nathaniel is forced into keeping out of society. Then we are introduced to his brother Robbie, who supposedly died years ago, and learn that Robbie was the older brother and Nathaniel isn't the true duke. This is revealed in the first half and I don't count it as a huge spoiler as the majority of the book is about Nathaniel and Althea growing to love one another but Nathaniel not seeing a way they can be together because of the tangle it would cause and possibly revealing Robbie is still alive.

Anything for my only brother.
And now, anything had become everything.

Burrowes is always good at the subtle but sweet and loving emotions between her leads and Nathaniel and Althea wonderfully showcase that talent. When they have their first meeting you can almost feel Nathaniel coming alive as Althea snips and pushes back at him as he outright refuses her request to tutor her in the ways of polite society, while also slipping in advice to her. The angst to keep them apart, Nathaniel trying to protect his brother, added depth to the story, his character, and made you hurt for this family. Robbie looks to be the hero in the next book in the series and I'm looking forward to seeing how his connection to Althea's sister Constance occurred and see him get his happily ever after. The struggle and love between Nathaniel and Robbie was felt but their mother's struggle wasn't completely understood for me. She had a bad relationship with her husband so she hated the estate but how it felt like she suddenly just decided to go back and help felt rushed; her whole inclusion in the story felt a bit out of place.

I will always be that hungry girl.

Althea's background and how that shaped her was heartfelt and will have you feeling for her as Nathaniel tells her to never beg, at first not appreciating the strength and courage Althea displays in doing so. If you are a reader of the series, you'll appreciate the glimpses of the Wentworth clan and their strong and loving familial bonds, Lord Stephen, the younger brother makes his usual charismatic appearance and I can't wait until we finally get his book.

This is the woman I was meant for.

I did think the second half dragged for a bit as the threads of Nathaniel not thinking he could have a life in order to protect his brother and Lady Phoebe trying to force society to hate and shun Althea slowed down too much in their route to conclusion. I also thought that Nathaniel spilled the beans to Althea about Robbie a bit quickly and their first sex scene felt gently abrupt. However, if you're looking for a sweet comforting read, Althea willing to prod and poke at Nathaniel was great and this couple had a lovely charmingly amusing chemistry that will warm your heart.
series Historical Grace Burrowes regency arc kyraryker-review