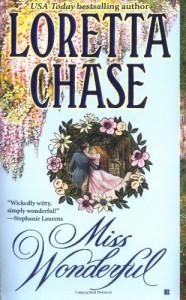 Not sure about this Alistair character; he is described as a wastrel, loves clothes, and is considered a hero for something he has no recollection for. Qualities usually not given to lead male characters in books. And to boot our heroine is thirty-one, gasp! What have we here Watson? I'm intrigued.

Wow never read someone described so poetically "Her eyes were blue, twilight blue, and for a moment she seemed to be the beginning and end of everything, from the sunrise halo of hair to the dusky blue of her eyes." Uh, sigh. Sign me up to be waxed poetically over.

No idea how to take this book. Alistair is constantly distracted by how atrociously Mirabel is dressed, hard for me to connect with a male character so incredibly into fashion. I think it was suppose to be funny, but it just weirded me out.
The author does an incredible job with her secondary characters, reminds me of Carla Kelly. Captain Hughes was awesome, I absolutely loved how he could turn anything into nautical terms.

Alistair's PTSD from the battle of Waterloo and the memories is very heartbreaking to read but the author somehow manages to keep things light and write Alistair's comments and feelings to keep the story from being weighed down in the ugliness of war. Alistair is not the typical scarred war hero, he has a calmness, lightheartedness, and unflappability to keep him from being dark.

Ok the canal business started to become tedious halfway through and I was grudgingly trying to understand its importance to the story.

Oh man the scene where Mirabel is stripping and Alistair tries to keep looking at his boots starts off funny and then shifts into "make your heart clench in your chest" when Alistair realizes Mirabel has felt ignored for so long and he final gives in and then says "I see you".

The last five or so chapters of the book were kind of boring for me. I was annoyed at how stubborn Mirabel was about the canal, which I again want to say took up way too much of the story and the Caleb Finch villain who kidnapped Mirabel's dad seemed like an unnecessary part to add. Mirabel and Alistair's relationship lost some of its spark and I just think the story could have wrapped up sooner. There are some great funny and heart clenching moments throughout but because of the canal and ending not a keeper.