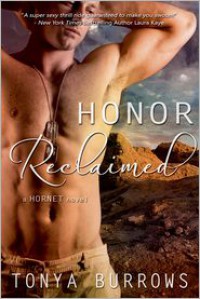 I found this book to be stronger than its predecessor and felt like the author improved and provided a more streamlined story.

Seth is a former Marine who was captured and tortured for 15months in Afghanistan. Needless to say, he suffers from PTSD. He has flashbacks as he participates in practice missions for his new off the radar mercenary group HORNET. His new teammates don't welcome him with open arms and are generally leery of him and his state of mind. When a new mission comes down the pipeline that calls for him to return to Afghanistan and rescue a captured soldier, the PTSD episodes intensify.

Phoebe is already in Afghanistan, taking pictures in hopes of generating sympathy and interest around the world for the injustices women face in the villages. She sees this as penance for the sleazy tabloid job she left behind where she had to write about how maybe it was a Marine's fault his team was killed and he was captured. Oh, I wonder who that Marine could be?

Phoebe and Seth collide when he rescues her in the town market. Turns out, Phoebe's friend is harboring a runaway wife, who just so happens to be running from the husband who has the captured Marine. Coincidences run a tad wild in this book. The bulk of the story is about trying to rescue the captured Marine and prevent the sell of a nuclear weapon to a man who would like to do not so nice things with it. (Are there nice things you can do with a suitcase nuclear weapon? I digress..)

The beginning of this started off kind of slow. It seemed to take forever for Phoebe and Seth to get together. This due to his PTSD standoffish broodiness. This improves as Phoebe "calms" Seth and he starts to gain the ability tell himself its gametime. When they do eventually get together, it was on like donkey kong; sexy times after sexy times. The second half of the book it changed gears so much, I then felt like their relationship was rushed. Then at the very end, there was the Big Reveal (Phoebe's sleazy tabloid story, yeah, she conveniently never found time to tell Seth she wrote that) which ended up feeling rushed because Seth decided to be a quickly forgiving soul. Their relationship ended up feeling very uneven and I may have to bill the author for whiplash.

The action side of the story arc was pretty good and probably at times eclipsed the romance side. Please don't read this as to mean very believable, this is romance land and I've never worked for or with a shady mercenary group but I'm guessing this is not accurate stuff, despite that I found it to be enjoyable. It was quick paced and suspenseful. Along the lines of Brockmann and Gerard. This is obviously a series that has many, many, many heroes waiting in the wings and I'll definitely be giving the next one a try.