Looking for Trouble by Victoria Dahl 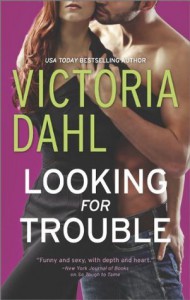 This is a sneaky little book; it lures you in with hot sexy chemistry and scenes between the leads and then half way through, sucker punches you with emotional upheaval brought on by unanswerable family sacrifice and dynamic questions.

Sophie has lived in the smaller town of Jackson her whole life, despite scrapbooks filled with pictures from cut up postcards of traveling destinations. Her mother left years ago abandoning a young Sophie, her stepfather, younger brother, and creating a town scandal due to the issue of her companion being a male and also married. The scandal had mostly died down as the years went on but with the new discovery of Sophie's mother and Wyatt Bishop's (the married man) bodies in a rusted vehicle lodged in a canyon not far out of town, the gossip starts again. The news of this also brings back Alex Bishop, son of Wyatt and advocate of runaway from your problems. While Sophie grasped on stronger to her stepfather, thinking if he needed her he would always love her, Alex pushed away his brother and mother as his mother grew increasingly more erratic in behavior. When Sophie and Alex meet, their chemistry is off the charts but when they have to start dealing with the fallout of their past and present actions, you really start to get to the heart of them.

This is a story of no easy answers. Should Alex have stayed and helped his brother deal with his unstable mother? Alex holds anger and resentment in his heart, thinking his mother was the adult and should have taken care of the children instead of the other way around. Was he wrong, was he selfish for leaving to go and lead his own life? Sophie holds fear and shame in heart, thinking her stepfather wouldn't want or love her if she didn't take care of him or her brother and that she has to hide her sexual nature or the town will think her a slut and homewrecker like her mother. Was Sophie wrong for overly taking care of her family; is it wrong that she likes sex rough? There are no easy answers to these questions and I love that this book doesn't try to answer or justify anyone's behavior but simply show these characters dealing with the aftermath of their decisions and actions.

Victoria Dahl's writing creates characters and situations with such a real feel, you will suddenly find yourself with tears in your eyes or a bursting heart. There were no lulls and even though this isn't an action book, the characters with their interactions kept the story moving along. I loved the prequel to this, Fanning the Flames, and discussed how I thought the main female character's life and emotions would hit home for a lot of women, this book with it's what are you willing or should you give up for your family question will also, I think, affect a lot of people. This book is funny, it's sexy, deep, emotional, very real, and most importantly it delivers. I can't wait to see what Dahl has in store for my emotions in the next book in the series.