In Your Dreams by Kristan Higgins 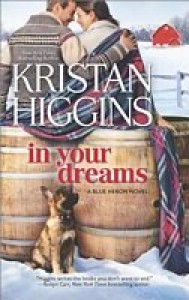 Emmaline is a tough chick with a soft sensitive side that she tries to keep guarded. She grew up with a stutter that led to her being ostracized from the other kids, well except from the other outcast Kevin, who was obese. They ended up being each other's shoulder to cry on and their friendship evolved into a romance. As Kevin gets unhealthier, Emmaline tries to encourage him to make healthier life choices, this includes going to the gym. There Kevin meets an over the top trainer who shames and degrades but surprise, Kevin really digs this and decides Emmaline is part of his problem and dumps her two months before their wedding. Reeling from losing her bestfriend and having her life fall apart, Emmaline moves back to her grandmother's house that was left to her and chooses to pursue a life of protecting and serving as the town deputy. Things are going along good, if not for the pesky problem of still missing Kevin and the occasional rising up of the hurt he caused, when a wedding invitation shows up from Kevin and his lovingly abusive trainer. Emmaline decides she has to show up and a date is fast required. Enter Jack, the town white knight. Jack is such an incredibly nice guy, he's liable to give you a cavity. He is just coming off of saving a couple teenagers from a car in a lake, dealing with the guilt of not quite being able to save one of them, PTSD from the accident, and oh, hey, his ex-wife, who cheated on him, is back in town looking to reconcile. Jack, to say the least, is ready for a little vaca and so we have him agreeing to be Emmaline's date to the out of town wedding.

As someone who didn't read the other books in the series, the beginning with all the mentions of the past characters was a little overwhelming; a lot of names are thrown the reader’s way. However, this doesn't last long as the story settles in and focuses more on Emmaline and Jack. This was a problem too as it was Emmaline and Jack, not Emmaline with Jack. There is a lot of story told in flashbacks with Emmaline and her ex-fiancé and Jack with his ex-wife. With that and then Emmaline's unresolved hurt, family issues, Jack with his PTSD, guilt, family issues, and semi-threatening things happening to him, there just wasn't a lot of time left for a romance between our two characters. I never felt exactly why they wanted to be together, well, besides the great sex, but as this is a pretty clean story, we never see that either. Our leads have some great banter but fairly lukewarm chemistry.

The story was rather slow moving with a few redundant scenes, as I read an ARC copy, I hope this gets some editing as I think it would help bring Emmaline and Jack to the forefront more and alleviate some of the bogged down feeling the pace takes on. There are some great lines and the issues Emmaline and Jack deal with will hit home for a lot of people, it's just the romance aspect of the story gets lost in the all the clutter and the ending wound up feeling rushed.

Even with all the complaints I leveled at this book, the author's writing is credible enough that if you are looking for a solid contemporary where romance isn't the main focus but rather two people dealing with their life issues, this would be worthy of a purchase. Others who have read the previous books in the series will probably enjoy Jack getting his happily ever after, also. For me, the occasional witty banter couldn't quite make up for all the other jumbled and imposing elements.