The Prince Who Loved Me by Karen Hawkins 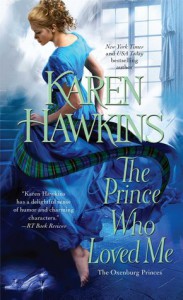 With a little bit of inspiration from Cinderella, The Prince Who Loved Me tells the tale of the loveable shy spinster Bronwyn and the dashing rakehell prince Aleksey.  He is intrigued by her and would like to whittle away the country hours by engaging in some bed sport.  She is wary of his slick charming attitude but would like to have a real life adventure that she so often reads about in books.  Both are looking for just some light and fun interactions.  Fate, well it has its own agenda.

Bronwyn is a very likable and relatable character.  She lost her mother as a very young girl, began to emulate her father, worried the family with her unladylike behavior, and ended up with a stepmother and sisters.  Unlike Cinderella however, Bronwyn gets along with her new family members and while she is compared to the older more beautiful one, there is no resentment or jealously.  Bronwyn is very strong minded and while at times she may lack self-confidence, she also goes after what she wants; readers will enjoy cheering her on.  Our hero Aleksey is the one I had a problem with.  For a large part of the story he was very selfish, immature, and displayed an overall unattractively young personality.  I can see why he was attracted to Bronwyn, intelligent and different from anyone he had meet before but beyond his good looks I have no idea what Bronwyn saw in Aleksey.

The story moves at a good pace, I'm just not sure anything really happens for eighty percent of it.  A majority of the story arc is Aleksey trying to convince Bronwyn to simply be in his presence.  Their interactions are all fairly quick and barely move beyond the "I want to seduce you" "I can't allow myself to be seduced! But oh my, look at those gorgeous eyes!"  Without any real substance to their connection I was left feeling very bereft when their first love scene occurred and wasn't as emotionally involved as I usually like to be when they eventually came together.  The "villainous" grandmother and stepmother were extremely overdone and detracted from the story rather than added to it as this story arc went on for too long and overshadowed Aleksey and Bronwyn towards the end.

Bronwyn was a keeper character for me, unfortunately Aleksey never measured up.  I also wish we could have seen them interact more away from the seduction/trying to avoid plot so more material could be gathered as to why these two felt such a strong connection to each other.  Ms. Hawkins can write, lamentably, this book fell short.