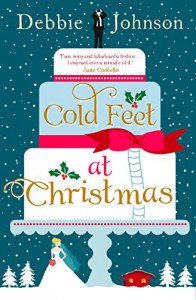 Leah is having quite the day, first she walked in on the groom banging a bridesmaid, by the way Leah is the bride, and now her car has stalled during a snowstorm in the middle of nowhere. A few minutes from hypothermia she spots a cozy cabin with lights on. Deciding that even a Hansel and Gretel situation would be better than freezing to death she knocks. The door opens to a god of a man, well really just some American named Rob but he looks like a god to Leah at the moment, and Leah promptly faints dead away into his arms. What follows is two sided longing, an escape to America, pushing away, and comedic fast read.

Leah is a spunky scrappy character that livens up the story. She deals with the bitter disappoint and hurt of discovering the man she was going to marry cheating on her wedding day with anger, sobbing, and acceptance as she can't ignore the feeling of relief when she finally admits to herself that he wasn't what she really wanted anyway. Her guilt and pain over her parent’s death add some depth to her but as it felt tagged on at times to provide some angst; we never entirely reach the deep end of the pool. Rob comes close to being a cookie cutter dark broody billionaire but his interactions with Leah and their resulting banter, teasing, and arguments help him raise the bar. His guilt over the death of his wife adds a darker underlining tone to the story that at first felt a bit uncomfortable as the book started off extremely jocular. Leah and Rob work best when they are teasingly poking and prodding each other, which fortunately is for most of the book.

Like I said before, Leah is an energetic character which in turn creates an active pace and turns this book into a quick read. I was a big fan of how funny it was; although I do think the word giggle was used too much in reference to Leah. While, weirdly, the reader doesn't get to "see" the first time our couple have sex, the subsequent times (especially an angry sex time) are relayed with enough detail to cause a few to blush. This is for the most part completely Leah and Rob's story as secondary characters stay regulated to the background with just a few bit moments from Rob's mother and brother; this is completely fine with me as I like my stars of the show to shine.

While Rob veered toward coldhearted jerk a few too many times, the ending was quick with too neat of bow placed on Leah and Rob's problems, and the funny and darker tones didn't completely gel all the time, this was still a good brief read. If looking for a snappy crisp holiday read, the humor and hot little sex scene make Cold Feet at Christmas worth the price of admission.