Held Against You by Season Vining 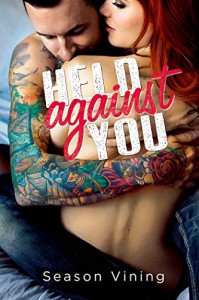 Kat is on the run, accused of murdering her stepfather and out on bail she decides Canada sounds better than a lifetime in jail. On the road Kat finds herself behaving and doing things she never would have thought herself capable of before. Only one man has been able to catch up with her, a bounty hunter she calls Steel because of his hard grey eyes and refusal to tell her his real name. Steel has been in the game a long time and plans on retiring after he collects this last bounty. The only problem is the closer to giving Kat up the more he doesn't want to. It becomes a game of who captured who and who will save who?

This story is written in first person pov with chapters alternating between Kat and Steel, this is not my favorite writing technique and is a personal prejudice that probably added to a lower rating, I feel it disrupts the flow of the story. If this doesn't bother you then please consider that when looking at my rating. The author also has a tendency to write with lyrical prose, very over descriptive and flowery, which I didn't really connect with. The suspense side of the story had a broad arc that was intriguing and good but some of the finer points were missing. The USB key around Kat's neck is mentioned sporadically throughout alerting the reader it is probably important but not until the very end is it explained and utilized in the story. Also, Kat is said to be a computer genius but her or Steel never take a moment to sit down and think about how they keep getting tracked down, seems like something people on the run would focus on. These were just two examples of the problem I had with the storyline, solid connecting puzzle pieces were left out in favor of creative writing side tangent ones.

The relationship between Kat and Steel worked better for me. Steel was alluring with his distant, hard, and cool personality. Kat is in her early twenties (Steel is in his early thirties) and their age difference with Kat's good-natured, pop culture spouting, light attitude ,and personality appeal mightily to his tired world weary soul. It is clear they both sense something in the other that each other needs and wants, Steel and his strength and Kat with her humanity. They play well off of one another, if not quite delving too far below the surface. This is in the vein of a New Adult so while Kat and Steel are extremely attracted to each other the sex scenes are muted.

There is an abrupt ending with everything wrapped up far too cleanly but also satisfactorily. There are a lot of hands in the pot, clingy ex-girlfriend, psycho sister-in-law, mother murder drama, and competing bounty hunter that fill out the puzzle, if not entirely click together. Held Against You is a quick read with a mysterious, sexy, and dangerous lead male that will capture your attention even if the surrounding story falls a bit short.