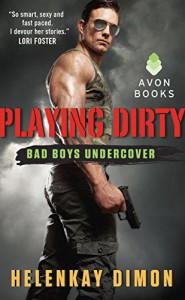 Commanding men, sinister terrorist plot, sexy bedroom scenes, and double dealing all lead to a romantic suspense story that is hot in more ways than one. Ford is former CIA now working for a very off the books government group called Alliance. Alliance also includes former MI6 and other tips of the spear military members. Coming off of a botched mission, Ford the leader of Bravo team is doing a little undercover work to get close to Shay, the cousin to a suspected terrorist. They have instant chemistry and Ford finds himself getting a lot closer to Shay than he originally anticipated. As missing deadly toxin vials and cat and mouse games with deadly consequences swirl around them, Ford is forced to decide what he'll compromise to keep Shay safe and Shay is left questioning if the man she loves is the true Ford.

This is an incredibly quick moving story; key players are constantly making moves that keep you turning the pages anxious to see where it is all going to lead. The strength is definitely in the suspense plot with the reader wondering how much is Shay's cousin really involved in the terrorist plot and who the mole is. Although, in the beginning when all the members of Alliance are kind of clustery thrust at the reader and who is who is being learned, things were a little muddled but about thirty percent in I was able to get into the flow of the story. Alliance and its members is the central core of the story with the terrorist plot/mole and Ford's romance with Shay branching off of that. Ford and Shay's relationship is strong throughout the story but they definitely get lost in the mix at times. Individuals looking for some romance in their suspense stories will fare better here than those looking for the vice versa.

As this is told from more of Ford's perspective he is the stronger character. He has a realness and ease that will have reader's instantly connecting with him. Also, let's be honest, his capability in and out of the bedroom and the way he loves Shay will have him starring in a couple of fantasies. Due to all of these strong components, the character of Shay doesn't pack much of a punch. Her limited screen time interactions with Ford consisting of a lot of sexual foreplay/activity and musings if Ford is trustworthy leave her relegated to the background. They are hot together but the fact that Shay doesn't discover who Ford is until very late in the book leave her an outsider to the story and the reader.

The introduction of all the characters might overwhelm you at first but as you get to know them, you'll be secretly wishing for each and everyone to get their own story. It's a well crafted, thought out, intriguing characters, with sex scenes that are on point book. If Playing Dirty is any indication to what the rest of the books in the Bad Boys Undercover series are going to be like, then sign me up for them all.