Accidentally in Love with the Biker by Teri Anne Stanley 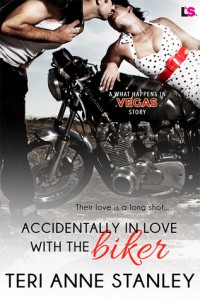 Kelli is traveling to Las Vegas in a last ditch effort to pursue her romance book writing career and to take a walk on the wild side for once. When she gets rear ended by a hot biker she asks him if he would be her pretend boyfriend for the night. Quinn doesn't know much about books in the romance genre but he knows he would like to discover more about it with the hot-to-trot Kelli. Facing off against frenemies, wine guzzling romance fanatics, and a judge-y mother, Kelli and Quinn will find out if what stays in Vegas can last in Vegas.

A quick fast read, Accidentally in Love with the Biker delivers what it promises with it’s cute title and flirty cover. It's mostly adorable with some good humor, (I love when romance writers can good naturally poke fun at themselves and the genre) steamy sex scenes, and a few times of delving into bigger issues. Kelli was a fun character to follow along with; her attitude and actions were amusing. Quinn was an antithesis to the abundant dark, broody, and growly alphas permeating the romance hero ranks lately. He was easy going and willing to go with the flow, he found himself in a dating game show and played along wonderfully in one of the book's most funny scenes. Together, they were just plain fun to read about. Their conversations and by-play kept the pace going and a grin appearing regularly on my face.

The secondary characters were a little more cliché with Kelli’s over-the-top frenemie. The way Kelli put up with the friend's rudeness and taking advantage of her made Kelli seem like a big push over. The slight drama between the friend and her fiancé was also unnecessary; it was manufactured drama that fell pretty flat at the end. Quinn's family drama would have added a great layer to his character if the story would have been longer and all the characters could have been flushed out more. His father, brother, and sister were barely pencil sketches and his mother's somewhat 180 at the end came off a little too pat.

I would have graded this closer to four stars but the last thirty percent or so felt rushed, even as it started to feel drawn out. Kelli and Quinn have some great sex scenes but Kelli is still mentally trying to push Quinn away as she thinks there is no hope for them when she goes back home to Georgia. This mental block she had kept popping up and feeling like forced angst to keep the mystery if they were going to have a happy ever after. All the other issues like Kelli's bad friend, Quinn's issue with thinking Kelli wants him to be more than a "biker" (which by the way, he's not a MC biker but designs motorcycles), and even their happily ever after to some extent, was pretty rushed with everything suddenly working perfect in the end.

All in all, though, this book serves its purpose. It was light, funny, and entertained me for a few hours. There are some great scenes at the romance book/writers convention, there’s an appearance of two bisexual wereparrots, that are guaranteed to make you laugh. If looking for a quick, light hearted, funny, and steamy read, this would be a great choice.