Beauty and the Highland Beast by Lecia Cornwall 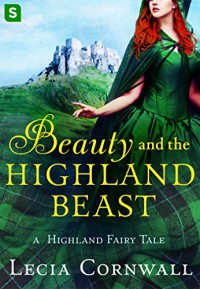 Dair is the seafaring prodigal son of chief Padraig of the clan Sinclair. When bringing his cousin to France to join a convent, they are captured. After being beaten and forced to watch his cousin raped and murdered, Dair returns home a broken man. His body is slowly healing but his mind seems beyond repair. A healer declares that only a pure virgin can heal him and his father sets out to find him one.
Fia is physically scarred and has a limp from an accident in childhood, therefore, her father and sisters are very protective of her. When Padraig meets her and sees how she heals a bird, he instantly wants to bring her to his son.
Dair and Fia are about to learn the true meaning of strength and healing.

He was still a prisoner, trapped inside the cage of his injured flesh, his damaged bones, his memories of unspeakable horrors. What would it take to set him free?

First in the Highland Fairy Tale series, this story plays off of the beauty and the beast theme. The fairy tale aspects, animals flock to our heroine like Snow White and our hero is a "beast", gave this a very light and fluffy tone. Fia also has an ill tempered cat named Beelzebub whose antics and fear he strikes in the hearts of big strong men, create the comic relief. While the abuse the hero suffered from his imprisonment and mental anguish from watching his cousin raped and hung (actually memories from the hero about this are told by him only once) give him a serious case of PTSD and the story a heavy tone. Unfortunately, these two contrasting tones didn't always mesh well together and gave the story a very uneven feel.

Dair was the best flushed out character with his storyline of being called "mad" by the clans people because of his nightmares, heavy drinking, and claiming he was seeing the ghost of his cousin. It's obvious he has PTSD but in 1700s Scotland, the priest is convinced its demons. Dair will definitely have your sympathies for what he has been through but a lot of his appearances have him solely being "mad". The few times he is not acting the part, he one dimensionally is attracted to Fia because of her gentle beauty. Fia had more facets to her character bio but they were just kind of thrown out there. She is said to have scars and a limp, why her family was protective of her but then her beauty is often discussed and no one seems to find her off putting, so which is it? (I'm not saying a woman can't be scarred and beautiful, just that the author seemed indecisive whether she wanted her heroine to be viewed as overtly beautiful or covertly) Then there was how Fia got her scars, the story is told once, with vague reasoning and details, and never brought up again. Not fully flushed out and incomplete reasoning had me never fully growing attached to our leads.

Along with the heroine's thrown out there details, I have to say the story's plot points, overall, were thrown out there to be left dangling. The villain was fairly obvious and his eventual reasonings made sense but the tie in with the ghost was pretty unbelievable. Sort of

Even if you think you are seeing a ghost, I would think most would notice the difference between a big MALE and a female in a dress. Also, no one else ever saw this "ghost" running around? The whole thing was a bit eye-rolling

I know the ghost drama was dragged out to create suspense for the reader but it fell extremely flat for me. The reasoning for why Fia's sister came along too, she was the one supposed to marry Dair while Fia was only supposed to heal him, was extremely awkward. It wasn't worked out well, which tied into how indecisive Fia was portrayed. The whole talk of only a "pure virgin" (the word virgin was used 61 times in this story, it got pretty tiring) healing Dair honestly felt like added in nonsense.

The writing at times felt a bit simplistic but that could have been the brought up and dumped elements. I enjoyed the overall concept of the story and the broad way the characters and story moved along and interacted but the structure and plot points to get them there, were willy nilly and some were simply unnecessary. This could overall be called a sweet story, only two bedroom scenes, so if looking for that aspect along with a Scottish setting and in a fairy tale vein, you might want to try and see if this author's style is for you.