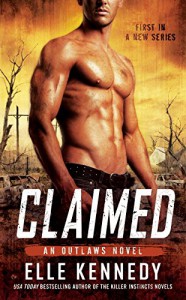 I had an advantage going in, from friends' reviews, I knew this was going to be a smutty time. My favorite description comes from Jilly and her review where she coins the term "dysmutia" dystopia + smut. It fits this perfectly.

Apparently, the world has experienced some apocalyptic instances, I think from climate and nuclear bombs. Apparently, the U.S. coast line is now Utah. Apparently, government as we know it is gone and it's more like a main governed city full of city dwellers that follow the rules and enforcers that well, you get it, enforce the rules. Outside the city are outlaws who don't want to follow the city rules. Enforcers at first gave the outlaws a chance to conform but now they are just killing them. Our heroine's brother is the leader of the enforcers and our hero wants the bro dead because he apparently killed his wife.

I use apparently and I think a lot because the dystopia aspect is barely a pencil sketch, the outline is there for me as a reader to form a general world and scene but for every page of actual story there is 50pgs of sex. I may be exaggerating but I'm not sure, these people be banging all up and down the block. They bang themselves, their neighbors, each other, and happy voyeur group style. Apparently, no one gives a fig about an audience.

I'll probably read the next in the series because I'm dying to find out how the war with the enforcers goes.  Hahahhaha, just kidding. I'm a pervert and I've seen the reviews on how hot the next one is.