My Brown-Eyed Earl by Anna Bennett 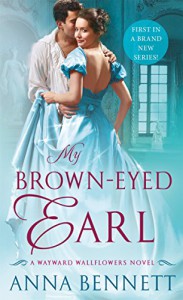 Meg and her sisters are known as the "Wilting Wallflowers". An unsuccessful season, money dwindling, and an Uncle who was nice enough to take them in but leans heavily on the eccentric side, have their prospects dwindling even further. Deciding to become a governess, Meg finds herself in the unenviable position of asking for a job from someone she once refused to become betrothed.
Lord Castleton, Will, has just had two twin girls thrust upon him and he needs help. His past dealings with Meg haven't all been great but once she is back in his sights, he finds he isn't quite ready to lose her again.

"Once you accept that many things in life are beyond your control, you might let go of the guilt…and realize you deserve to be happy."

The first in a new series, My Brown-Eyed Earl stars Meg the oldest of the Wilting Wallflowers. I found her biggest personality trait to be martyrdom as she blames herself for her parents’ death and feels she shouldn't have any happiness. She was a steady character, never throwing hysterics or committing any TSTL moments but in a story where not a lot happens, not a difficult feat. Will is the punished for a teenage transgression who inherited an impoverished earldom and managed to turn it around romance hero. He's somewhat perplexed by the twin girls who he doesn't really spend a lot of time with and finds himself inexplicably drawn to Meg.

The way in which Meg and Will get reunited, because of the past they shared, is a bit side-eye coincidence but this is romancelandia, so I'm usually willing to roll with it. What I don't want to roll with though, is the inexplicably I mentioned. Where are the dialogue, passion, and emotion? I read romance to feel and experience the hero and heroine's relationship grow and build; that's missing here. The characters and story felt like just going through the motions, there was nothing special or parts of the story to differentiate this from the thousands of other regency romances; this honestly felt like paint-by-numbers regency.

The writing is good and if you were brand new to romance, this might work for you. The hero and heroine are vanilla pudding enjoyable, the twin girls adding a dash of adorableness, and the rest of the secondary characters add the minimum of villainy or support depending on their role. The story thread of the strange man looking for the twins worked in the beginning to add a touch of dangerous intrigue but it was pushed to the side too much and left to the very end with a bit of eye-rolling "that's what that was about?!".

There was a charming scene that involved a funeral for a dress that finally showed some inventiveness in the author's writing and some sweetness with the hero giving the heroine a choice about her future but mostly, this was missing a lot of spark. There were some sexy scenes, I thought they started a bit soon but missing the emotion between the couple could have been the problem I had with this. This story isn't bad, like I said, the writing is good but it's not memorable; a cake donut with no frosting and nary a sprinkle in sight.