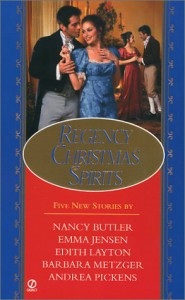 Task the Sixth:  The Hanukkah:

Not to sound all "get off my lawn!" but reading older published stories (they have their problems too) is sometimes very refreshing; it's amazing how much story can be created in favor of just hurriedly working to get the leads into bed. I like my sexy times but purpose and dialogue, y'all. These were all short, sweet, and nothing beyond kissing regency holiday stories.

“The Merry Wanderer” by Nancy Butler

This one had a magical feel to it with Robin Goodfellow, Merlin, faeries, and an Arthur sighting. The heroine's family guards a very important faerie book and Robin visits to make sure the heroine is up to the task of guarding it. It was a bit slow moving but fairy tale fun.

“The Wexford Carol” by Emma Jensen

"Is that what you will wish for, then? My speedy demise?"

As he watched, surprised, charmed, and increasingly warm, she removed another sprig of holly from her pocket, tucked it into a buttonhole on his coat, and briskly patted his chest.

"As you could easily guess, I will make a wish for Hollymore."

With that, she stepped back, draped an arm around the cherub, and surveyed her handiwork on Rhys's coat. She gave a satisfied nod. In that brief moment, Rhys was enchanted to his toes.

This was a super sweet and funny story but was little bit lacking in the showing the relationship build between leads (these were all pretty short stories). The hero and heroine spend a week together with the hero's cheeky nephew, mistaken identities, semi-villain relatives and a house with more character than stable walls. It was lovely and being set in Ireland, gave it a beautiful Irish Christmas spirit.

He'd never be thought of as handsome, except in a certain light and at certain moments, when anyone could see he was much more than that.

My favorite from the series because the author was able to build and create a relationship between the leads in the short amount of time allotted. The heroine is having her season but super nervous so her brother advises her to imbibe a bit for Dutch courage. Hero is sent by his sister and aunt to call on heroine to warn her away from his cousin who they want to marry someone else. Hero is charmed by her and calls on her during the day, falling love. At night he is shocked by her flirty different attitude at balls, figures out she is drinking, takes her to a pub to show her alcoholics, and gives her a come to Jesus talk. It sounds preachy but the heroine's shyness and the hero's melting stoicism makes this a very sweet story.

“The Christmas Curse” by Barbara Metzger

This one has ghosts for "spirits" with a medieval couple haunting a castle, able to actually affect things during the week of Christmas, because the husband in a jealous act jousted someone but died and the wife had made curse that if he didn't return her ring to the castle they would never rest. Their heir and hero is a battle scarred war hero and our heroine is a widow with a horrible aunt. There's guilt, shame, anger, fear, and love but the characters and story all felt a bit disjointed. We get great flushed out backstories for the heroine and hero but current scenes with them together were missing, I wanted to see them fall in love.

“A Gathering of Gifts” by Andrea Pickens

Indeed, the more they spoke, the more intriguing she became.

This involved a Duke's daughter who started off a total spoiled brat and an ex-soldier who wouldn't give into her whims. Heroine injured her ankle so has to stay at the hero's manor, where they bicker and snark themselves into falling in love. The hero's sister, nephew, heroine's cousin, and others gave this a great fun cast of characters. I really liked how it was shown how the hero and heroine caused each other to grow and become better, very charming story.