As soon as the plague broke out, the population almost immediately abandoned calm, rational Stoicism in favor of believing in magic and killing Christians.

This is what encapsulates the true horror of plagues or sicknesses for me, the mass hysteria. The building up and spreading of people not being able to keep calm, hey I get it everyone is dying around you, and work the problem. The way fear breeds a willingness to stop critically thinking and devolve into easier, keep it out of my hands answers. Science doesn't always get it right, because of how the data is analyzed or perceived, but the use of evidence and facts is where I what I want to put my belief in.

In almost every plague throughout history, it takes a remarkably strong leader just to keep the bodies out of the streets.

This is so huge, along with how your society is structured. I can't imagine delegating, being in charge of the Roman populace at this time and being the one to keep it all together. It does make you think Marcus Aurelius deserves the hype.

The Tiber River was also prone to flooding, which meant (forgive this description but there’s no other clear way to say it) that a river of shit would occasionally flow through the streets.

I have a healthy respect for our sanitation infrastructure but I still don't think it is enough. It rarely fails that when I read historical documents, the "river of shit" comes up and I want to die a thousand deaths (I probably would if I lived back then!) imagining the smell. Fire, humans greatest achievement? Maybe, but I do like me some plumbing.

“Even if we split the difference between the most impressive scholarly studies, we can’t get lower than a total mortality of 10 million.” It was probably higher! McLynn himself estimates the total death toll as around 18 million. At the height of the outbreak, slightly later in 189, Cassius Dio claimed it caused around two thousand deaths a day in Rome.

Holy f*ck. You can see why people clung to magic and mysticism, the sheer horror of the amount of loss is unbelievable. Without the foundation of solid science and medicine, I can't imagine what people were thinking or dealing with. The whole not understanding, of what was happening or what the disease was, is hard for me to get in the mindset because we do have a framework for diseases now; to not know how to go about not getting sick is terrifying.  Also, anti-vaxxers, please take note.

Personality-wise, you could think of him as the Donald Trump of ancient Rome.

And despite what some breathtakingly stupid intellectuals would have you believe, the people and interests of the past weren’t necessarily smart and serious any more than the people and interests of the present are dumb and frivolous. Knowing about pop culture doesn’t make you dumb; it makes you a person who is interested in the world you live in.

The nostalgia affect, is always amusing; kids used to be respectful!, people are lazy today!, all content put out is crap now!. Feeling superior, fear of feeling left behind, or just generally curmudgeon because what you like isn't popular or relevant anymore is going to hit everyone but times, they do a change.

I generally like how the author is going about writing this, she gets a bit overly trying to be funny, sarcastic, light at times but I can see how the material could get dry for some without the breaks; keeps the pace going at a clip, too.

As I'm not a hat wearer, but Raiden's drama side demanded to be flexed, we decided to dress the part for this book, 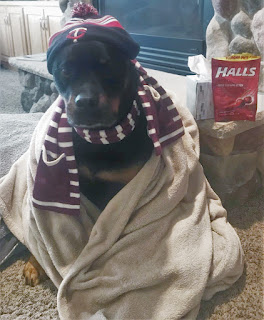 Can't wait to see what everyone else is thinking about this book so far!