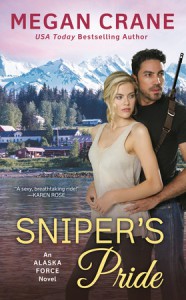 After being sent to the hospital twice over her shellfish allergy, Mariah is starting to think there is something nefarious going on. She's in the middle of getting a divorce from her emotionally abusive husband who doesn't want the embarrassment of a divorce as he is gearing up to run for office. Her late night YouTube surfing has led her to contact a group of men who call themselves Alaska Force.

Griffin isn't a fan of prissy blonde women after he found his wife and bestfriend were cheating on him. He's days as a Marine sniper have given a particular set of skills but have also made him think he shouldn't be around civilians. When Mariah shows up looking for help, his guard is instantly up.

While Alaska Force tries to determine is Mariah is really in danger, Griffin fights his own battle against falling for the client.

They were men without ties. Some without pasts.

The Alaska Force is made up of former military men, second in the series Sniper's Pride, focuses on Griffin. I have not read the first in the series but I had no problem jumping in here as the author gives sufficient background on the group and how everyone ties in together. Our heroine Mariah is a new character and has the grace and backbone of a girl who grew-up on the wrong side of the tracks and had to survive the snake pit of high society.

Griffin came off a bit harsh with Mariah in the beginning, he was making her pay for the pain his ex-wife cost him, I'm not sure I fully forgave him for his attitude. It was also excessively pushed how he felt he couldn't be around civilians. I read a good amount of romantic suspense, so maybe I'm just worn on this trope but I felt there wasn't enough given of Griffin's personality for me to believe in why he felt this way. Griffin says it over and over, the telling me all the time but not showing which leads me to not feeling.

Mariah was the stronger of the two characters, her admitting that she married to escape her family and poverty, to building up enough self-esteem to leave her marriage, and standing up to Griffin. Her character was sweet, strong, and funny. The chemistry between the two wasn't as strong as I would have liked, a lot of my issues was due to how rude Griffin could be to her at times. Their first sex scene felt a bit out of nowhere and their “I love yous” seemed very quick.

We get to see a couple of the other members of the Alaska Force, a teased romance between the founder and a grumpy cafe owner, but I would have liked to have seen more scenes between all the guys or Griffin's friendship with them, I think it would have filled out his character more.

All in all, this was basic line romantic suspense, Griffin was a bit cardboard cut-out alpha male, the villain was kind of fantastical, and the danger had the heroine needing to be rescued. Tropes that rom suspense readers look for, they just weren't given a fresh feel or much umph behind them.