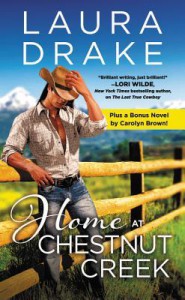 Nevada Sweet is on the run and with a lack of funds, she decides to hit up an old work colleague to see if she has a job for her. Unforgiven is a small town but the restaurant where Nevada buses tables has a cook that makes it hard for her to want to move on.

Joseph “Fishing Eagle” King is Dine through and through and would do anything for his Navajo community. He offers the diner's new employee a place to stay but never sees himself getting involved with a white woman.

Nevada is busy trying to hide from her present and Joseph refuses to let the past go, these two can try and hide from themselves but they can't hide from each other.

She is an odd combination; equal parts swagger and fear. Once you realize the swagger is a mask, it's easy to see the fear beneath.

Home at Chestnut Creek is book two in the Chestnut Creek series and while it is possible to read this as a standalone like I did, you miss some of the background relationships in the first that end up playing a part here. I was lost as to why Nevada would go to her old work colleague, who I guess is more of a friend that Nevada wants to let on. If you're on the run and don't want someone to find you, I'm not sure you'd go to someone you had a previous connection with, but again, not having read the first, I'm not sure how close these two characters actually were.

This story was written in first person point of view and present tense, this is a very hard combination for me to personally read, if you're not bothered by that structure, then your mileage would vary greatly. I also had a very hard time warming up to Nevada. She came across extremely immature and trying a bit too hard to be a rebel, she was more bratty teenager than closed, hardened heart woman to me (her age is early twenties). She mellows some in the second half and opens up a bit to Joseph but her being rude, snarky only came off as thus, and didn't translate to scared, vulnerable, just lashing out in fear of not wanting to get close to people.

“Forgiving others is much easier than forgiving yourself.”

Joseph was the more interesting character to me but it takes a while to get why he feels he shouldn't get involved with a white woman and must devote his life to his Navajo community. There was so much just tell and talk about him being dedicated to his community, but besides running with a group of Navajo girls, we never get any showing. Which was one of the biggest problems I had with this book, a lot of surface telling and no substance showing what the author was trying to relay about the characters.

The suspense story line of why Nevada was running, made sense when we finally are let in as to why but the villain she is running from gets only a handful of povs, does basically nothing but get lucky to find Nevada and then is dealt with very quickly. The ending was a rushed, forced happy everyone gets along now.

This might have benefited from a larger page count to allow the author to expand on the plots and emotions. Joseph's pain from thinking he betrayed his family, the running group that doesn't like Nevada but has a sudden moment of sharing their deepest darkest secrets with her to never really become a part of the story again, Nevada finally saying she is going to “stop running” and opens up to Joseph telling him the truth, only to on the same night, after they are inmate, run away for “his safety”.

The writing structure, lack of depth to characters' emotions and actions, and motivations not always making sense, had this a tough read for me. I would only recommend this to previous Drake readers who enjoyed her style or people who have read the first in the series and enjoyed.