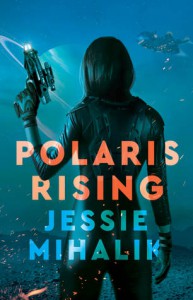 This definitely had a The League series by Sherrilyn Kenyon vibe, scifi/space opera/warring factions, if you liked that series, you'll want to give this one a go.

This was a debut and I felt like I could tell with how the overall story needed to be tightened up more. This was first person pov by the heroine Ada and while I enjoyed her voice and character, there was too much talk of going through the motions of menial tasks. 20-50% and around the 70% mark, my eyes glazed over a couple times. I just thought the fat needed to be trimmed and the story tightened up.

This was very much a first in the series with the world building and setting up of plot threads, like I said, I enjoyed Ada's character but her love interest, Loch, was only a pencil sketch to me. Not having his pov probably added to this but only hinting at and introducing the Genesis Project plot, instead of investing some time on it, kept me from fully knowing his character.

Ada and Loch spend a lot of time together and their attraction is very much a part of the story but at the same time, not really the focus. Their attraction and relationship never matured enough for me to feel it was solid and therefore wasn't very emotionally investing for me.

The writing has a smoothness and, like I said, there are some intriguing threads set-up, that I'm on board for reading the second in the series.